The customer supposedly left instructions for the delivery executive - requesting that they reach a certain shop and ask for him. 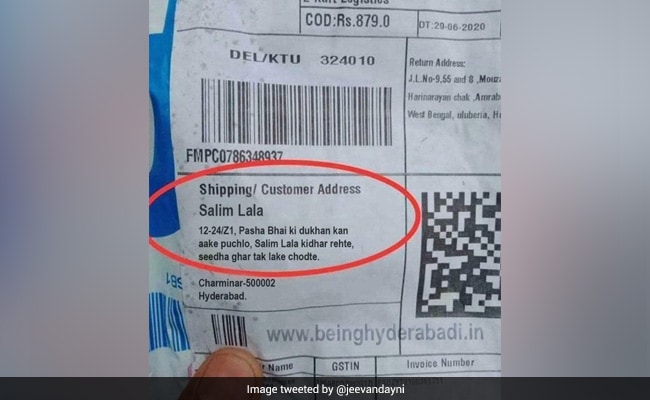 A picture of a funny address on a delivery package is going viral online.

A photo of a bizarre delivery address that has made thousands of people laugh is, sadly, fake. The photograph in question shows a Flipkart delivery packet addressed to one "Salim Lala". Instead of an address, the customer supposedly left instructions for the delivery executive - requesting that they reach a certain shop and ask for him.

"I cant stop laughing," wrote one Twitter user while sharing a picture of the parcel on the microblogging platform.

The picture has gone viral with over 17,000 'likes' and a ton of amused comments. But while it has made hundreds of people laugh, the address - as a few people in the comments section also pointed out - has actually been photoshopped.

The real picture has actually been circulating on social media since July 2020 and it features an equally funny delivery address. Addressed to Udayveer Shaktawat in Kota, Rajasthan, it reads, "Mandir ke samne aate hi phone laaga lena mein aa jaunga (Reach the temple and call me, I'll come pick it up)."

First shared on Reddit, the pic was later reposted by Flipkart with the customer's name blurred out.

Compare the two images and it is clear that everything except the name and address matches. This makes it clear that one has been edited.

This isn't the first time that social media has fallen for a fake pic. Last year, a pic of a 'human-sized' bat was proven to be nothing more than clever photography.