Read inOther Languages
This Article is From Nov 10, 2020

Dudhwa Tigress And Cubs Walk Up To Person Filming Their Video. Watch 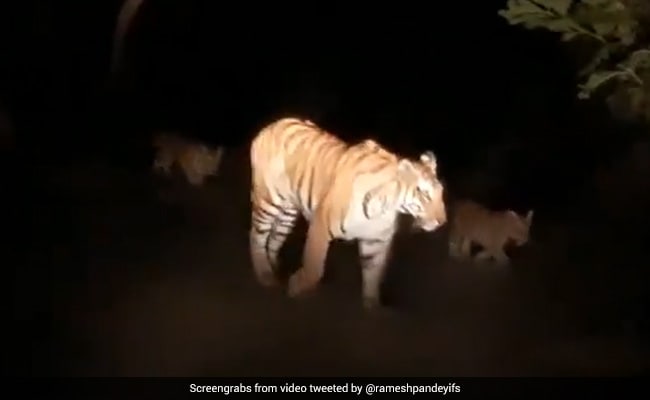 A tigress with her cubs at Dudhwa Tiger Reserve.

The field director of Dudhwa Tiger Reserve managed to capture on camera the "brilliant and beautiful" sight of a tigress with her cubs. In the video filmed after nightfall, the tigress can be seen out on a walk with her family of four cubs.

Initially, the tigress appears to be walking away from the car where the person filming them sits. Then, she turns around and walks right up to the field director recording them, cubs in tow. Illuminated by the headlights of the vehicle, the tiger family is visible for a few seconds before it again walks away into the cover of darkness.

Senior Indian Forest Service officer Ramesh Pandey shared the video on Twitter yesterday, saying that it was worth a watch.

"Brilliant and beautiful capture of tigress with cubs in Dudhwa Tiger Reserve by Field Director. A worth watch," he wrote while sharing the clip.

Brilliant and beautiful capture of tigress with cubs in Dudhwa Tiger Reserve by Field Director. A worth watch. @ntca_india@UpforestUppic.twitter.com/1maLjD13K7

The video has been viewed thousands of times since being shared on the microblogging platform, where it has also collected a ton of amazed comments.

"Rewards of Forest Service. Would have been more rewarding to all of us without the sound of the camera," wrote IFS Susanta Nanda, while another Twitter user hailed it as a "sight to behold."

Several people marvelled at the comfort level that the tigress displayed around people.

"Wow! Amazed at its comfort level against bright lights specially with such young cubs!!" wrote one person.

"Wow! It's heartening to see that she and her cubs are very comfortable with the presence of people. Secured, she walks straight and up close towards the vehicle ... Lucky people," said another.