Greg Ellis recently played drums on the streets of Pune 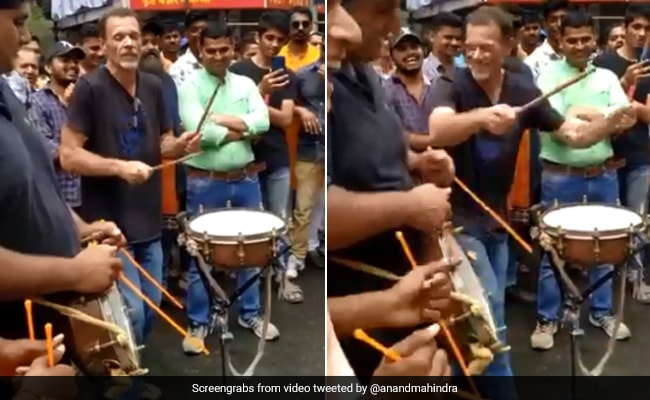 American drummer Greg Ellis played on the streets of Pune.

American drummer and percussionist Greg Ellis recently took part in Ganesh Chaturthi festival celebrations in Pune, Maharashtra. Videos shared online show the world-renowned drummer, who can be heard in the background of Hollywood blockbusters like The Matrix and Godzilla, playing on the streets as a crowd cheers him on. One such video made it to the famed 'WhatsApp Wonder Box' of businessman Anand Mahindra, who shared it on Twitter.

"The Ganesh festival's already gone global but this fusion on Mumbai's streets is exciting," he wrote while sharing the video, misidentifying the city as Mumbai.

He went on to ask his Twitter followers if the cultural team of his company should look into organising a street drums festival every year during the time of Ganesh festival.

Take a look at the video shared by Anand Mahindra below:

Apparently a Hollywood music producer.The Ganesh festival's already gone global but this fusion on Mumbai's streets is exciting. Do you think our Cultural team should organise an international Street Drums festival every year during the Ganesh immersions? #whatsappwonderboxpic.twitter.com/MFwZwgzUqV

The video has been viewed over 2.9 lakh times. While many praised Mr Ellis, others responded to Anand Mahindra's question.

Yes sir you are absolutely correct. We need to promote our street culture..

Mr Mahindra's WhatsApp Wonder Box has given us many wonderful videos over the years. Last year, he had similarly delighted viewers with a video of cops in New York doing garba.