Driver Falls Asleep At Wheel, Near Miss With Scooterist Caught On Camera

While the rider manages to avert a mishap, the car heads straight into a pole along the side of the road. 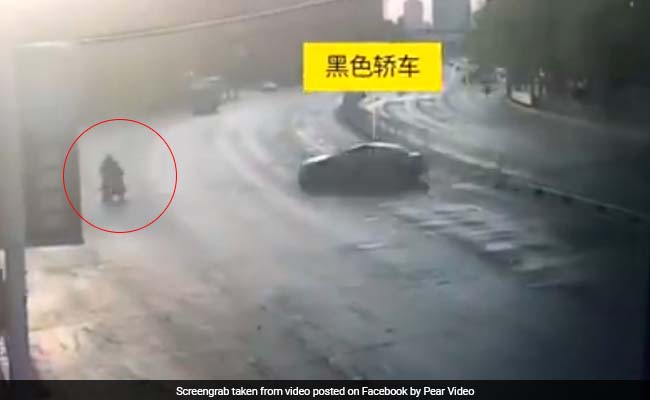 The car driver broke through a road divider and lost control

A near miss between a car and an unsuspecting scooterist was caught on CCTV in China. The driver reportedly fell asleep behind the wheel and swerved across the road, according to Pear Video.

The video begins with a black sedan speeding uncontrollably towards a divider. It breaks through the divider and heads straight towards a two-wheeler rider who is unaware of the imminent danger coming his way. Just as the car is about to ram the scooter, the rider stops and changes course to avoid a deadly collision with the car.

While the rider manages to avert a mishap, the car heads straight into a pole along the side of the road. The impact leaves a big dent on the car's bonnet, deploying the car's airbags. It's unclear if the driver was hurt in the incident which reportedly took place on May 8.

Promoted
Listen to the latest songs, only on JioSaavn.com
Watch the near miss here:


In April, a driver's negligence almost resulted in a pile-up-like situation in the middle of the highway. Video showed the white car suddenly halting in the middle of a busy highway without using its indicator lights for the vehicles behind. An oncoming truck was forced to maneuver out of one lane so as not to hit the car. The truck narrowly avoided a collision but toppled as it swerved too quickly. Another truck, noticing the scene ahead, tries to slow down, only to skid on the expressway as well.Click for more trending news