"His face was bloodshot and starting to turn blue," said Officer Carey 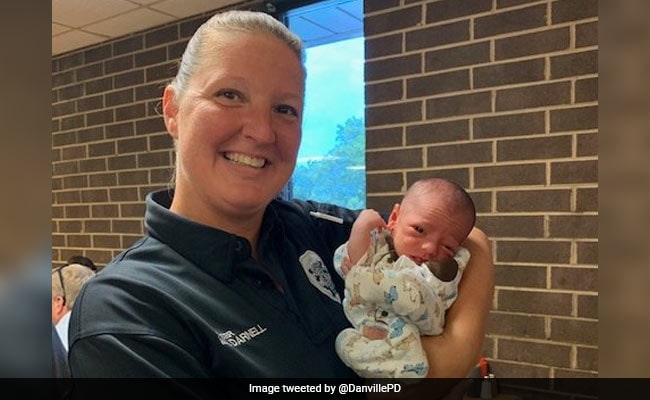 Officer Carey has been praised for saving the life of a two-week-old baby.

A police officer is being hailed a hero for saving the life of a choking baby in a dramatic rescue that was captured on video. Officer Melissa Carey of Danville, Virginia, was eating lunch at a restaurant on Tuesday when a waitress approached her asking for help. At another table, a two-week-old baby had stopped breathing after choking.

"His face was bloodshot and starting to turn blue," said Melissa Carey to WFXR TV.

Officer Carey immediately rushed to the distressed infant and began to administer first aid. She took the boy, named Lucas, from his grandmother's arms and turned him over to deliver back blows in accordance with first aid training. Thanks to her quick-thinking and life-saving efforts, the baby was able to breathe again.

The incident was filmed on the restaurant's surveillance cameras, and the video tweeted by Danville VA Police Department on Wednesday. According to police, the baby's mother thanked Officer Carey for saving his life and said: "If it was not for Officer Carey, my baby would not be here."

Casually eating lunch-to saving a baby's life-all in the day's work of a law enforcement officer. Today Off. Melissa Carey rescued a two-week-old who was choking and had stopped breathing. The mother stated that, “If it was not for Off. Carey, my baby would not be here.” pic.twitter.com/hKWALL8TNr

The Danville Police Department also shared a picture of Officer Carey with Lucas: