Dog Named Mayor Of US Town. His 'Pawlicies' Include Hugs, Cookies For All

Parker the Snow Dog was sworn in as the mayor of Georgetown, Colorado. 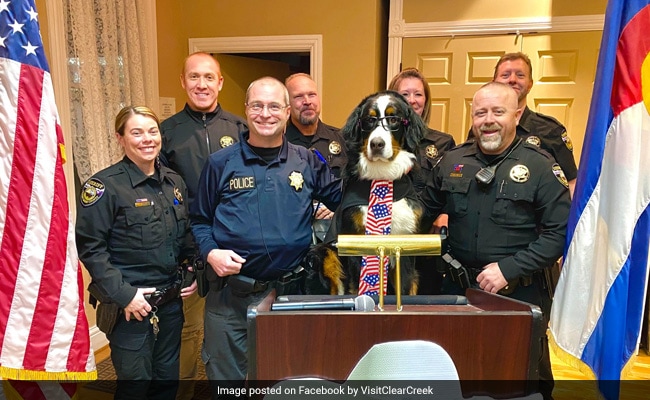 Suitably dressed in a tie and dignified spectacles, Parker the Snow Dog was sworn in as the mayor of Georgetown on Tuesday.  The dog was unanimously voted the honorary mayor of the small Colorado town by the town Board of Selectmen on February 11, reports the New York Post. The decision was welcomed by dog-lovers across social media.

According to his website, Parker's 'pawlicies' include bringing "hugs, love, and cookies to the people of Georgetown."

Parker's inauguration ceremony took place at the Georgetown Community Center. Clear Creek County later shared photos from the ceremony on Facebook, where they have delighted many.

"It was a packed house Tuesday Night at the Georgetown Community Center for Parker's Inauguration Ceremony. Local law enforcement, citizens of Georgetown and fans of Parker the Snow Dog attended the event," they wrote while sharing the pictures.

According to KDVR, Police Judge Lynette Kelsey presided over the ceremony and administered the oath to Parker.

The adorable photos were also posted on Parker the Snow Dog's own Instagram account, where many congratulated him on his 'pawlitical' success.

"Congratulations all the way from New Hampshire! If I lived in Colorado I would have voted for you!" wrote one Instagram user. "Congratulations. Georgetown is a lucky city," said another.

Besides being mayor, Parker is also the mascot for Loveland Ski Area, Camp Therapy Dog for the Rocky Mountain Village Easter Seals Camp and is featured on most Denver Broncos nationally televised games.