"Out Of Syllabus": Memes Galore After RBI's Sudden Rate Hike

The RBI raised its key lending rate to 4.40 per cent with immediate effect on Wednesday. 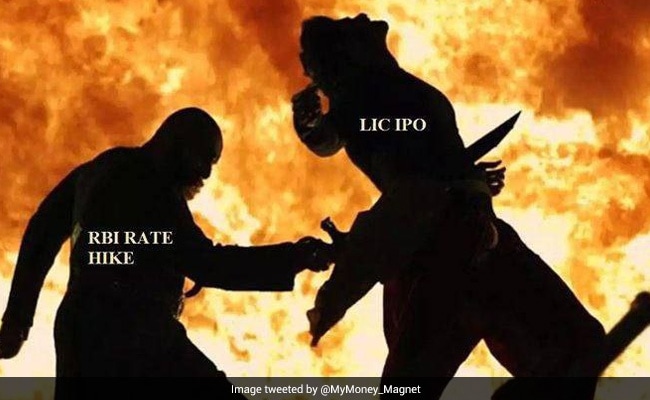 LIC is one of the most-awaited IPOs to date

It was a regular Wednesday until the Reserve Bank of India announced that it has raised its key lending rate by 40 basis points to 4.40 per cent. Additionally, the central bank also raised the cash reserve ratio by 50 basis points. That's not all, the hike that took key market players by surprise also happened to coincide with the first day of Life Insurance Corporation of India's Initial Public Offering (IPO). The IPO that opened today to raise ₹ 21,000 crores from investors, is one of the most-awaited IPOs to date. The big developments, no doubt, caught the attention of Twitter users, who reacted to the news with memes and jokes.

Several users were quick to point out how RBI's move came on the same day as LIC's IPO, and some were not impressed.

The real surprise is not RBI action but it happened on the LIC IPO opening date itself .

Did RBI just steal LIC's thunder? Some users think so.

Also, there was a Baahubali reference, with RBI as Kattappa. Yes, you read that right.

And, a Rajinikanth meme as well.

People were also open about how the RBI move affected their decision.

If LIC could talk it would tell RBI, “Bhai kya kar raha hai tu (Brother, what are you doing?)” another user commented.

Here's another meme of what LIC is thinking:

The rate hike was simply “out of syllabus,” another wrote.

RBI's decision came after an unscheduled meeting of the Monetary Policy Committee (MPC) with the central board, held between May 2 and May 4. RBI Governor Shaktikanta Das said that the decision was taken in view of rising inflation, high crude oil prices, shortage of commodities globally, and geopolitical tensions, which have had an impact on the Indian economy.