The bar for in-flight entertainment has officially been raised. Scroll down to watch the viral video 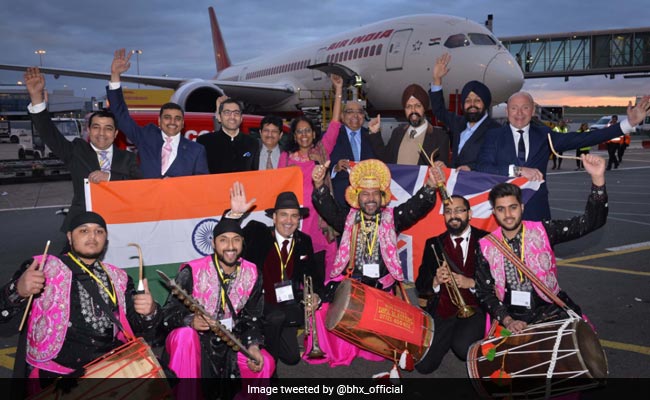 New Delhi: After a gap of eight years, Air India resumed non-stop flights between Amritsar and Birmingham on Tuesday. The news was cause for celebration for many and celebrate they did. Passengers flying to India from Britain were in for a musical surprise: moments before takeoff, a special dhol performance to send them off in style. Videos circulating online show delighted passengers cheering and clapping as enthusiastic dhol players drum up a storm.

"The terminal came alive (on Tuesday) with Indian drummers and dancers weaving their way through passengers who were joined by Members of Parliament, business leaders and members of the Sikh UK community," said officials from Birmingham Airport in a statement to the press.

Footage was also posted on Facebook by Dhol Blasters, the talented musicians who put on the dazzling performance.


Since being uploaded on Facebook on Wednesday, the video has been viewed over 13,000 times and shared 190 times. The clip has collected over 350 reactions.

"Now that's my kind of inflight entertainment," comments one person on the video. "Absolutely brilliant! l was dancing while watching it," comments another. "Wonderful uncle ji! Bet the passengers wanted to take you all the way with them," jokes a third.

Promoted
Listen to the latest songs, only on JioSaavn.com
Air India will fly between Birmingham and Amritsar twice-a-week on Tuesday and Thursday with a Boeing 787 aircraft.

According to an Air India official, the airline is the only one to offer direct flights between Punjab and the United Kingdom.Click for more trending news