Dhinchak Pooja Is Back With A New Song. In This One, She's A "Biker"

The song received a flurry of reactions from social media users and as expected they were hilarious. 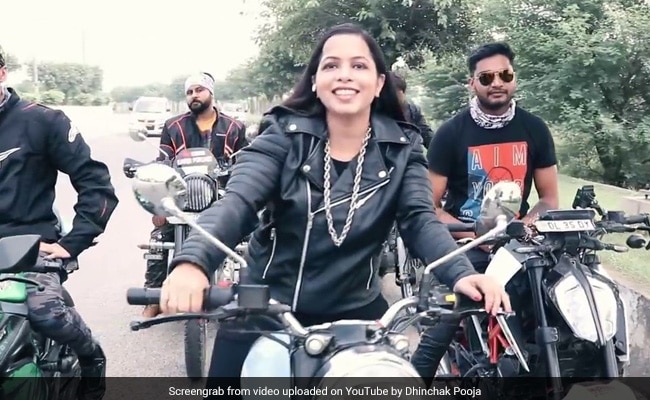 For social media users, Dhinchak Pooja is no unfamiliar name. Pooja Jain went viral on YouTube nearly five years ago for her song Selfie Maine Le Li. She followed this up with other numbers such as Swag Wali Topi and Dilon Ka Shooter. All the songs and the singer herself captured the nation's imagination for her rather out of tune singing, which came to be identified as her trademark at least among social media users. Now, giving meme-makers and Internet users fodder for content in the very first month of the year, Dhinchak Pooja is back with her new song, I'm A Biker.

In the video, Dhinchak Pooja is dressed in what is considered to be traditional biker attire, with a leather jacket in place. Sitting on a bike and flanked by bikers on either side, Dhinchak Pooja sings, “I'm biker, jaise koi tiger, mote thodi diet kar, tu bhi mujhe like kar…” The rest of the song follows pretty much the same template with lyrics that rhyme in Hindi and English.

The song has garnered over 78,000 in less than two days of being shared on YouTube. The comments section has been turned off. This, however, did not stop social media users from sharing their two cents about the track.

This listener declared, “Dhinchak Pooja has released her new single I'm A Biker. So now we have to fight 2 viral adversities.”

Dhinchak Pooja has released her new single ‘I am a Biker',
So now we have to fight 2 Viral Adversities.#dhinchakpooja

Tell us what you think of Dhinchak Pooja's latest track in the comments below.