Twitter Shares Pics Of Delhi Haze Before And After Diwali

"These before and after Diwali photos of Delhi show exactly how bad the air quality in the city is," wrote one Twitter user 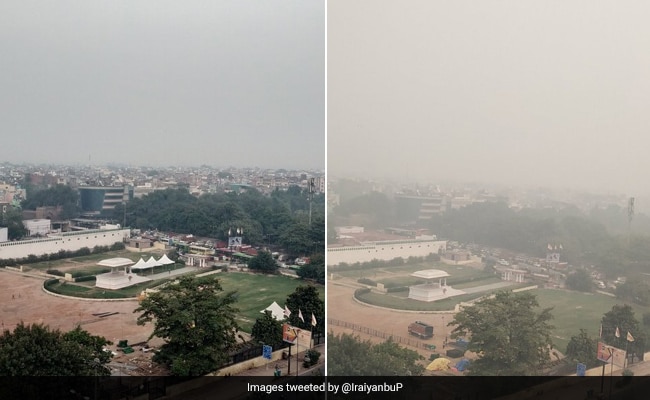 A pic shared on Twitter shows Delhi enveloped in a thick haze.

Diwali celebrations and stubble burning in Punjab and Haryana have left Delhi gasping for breath. Since Monday, the air quality in the national capital has entered the "severe" category -- the second worst level in terms of pollution. According to news agency IANS, stubble burning extended the toxic air quality in Delhi for the third day as persisting calm surface winds prevented dispersion of pollutants. Many on social media complained about a thick haze enveloping the city, saying it has become the norm every winter.

A number of social media users shared pictures of the haze enveloping Delhi and criticising the rise in air pollution. The pictures show the city encapsulated in a thick haze due to the heavy load of smoke from stubble burning in Haryana and Punjab.

"Toxic haze all over," wrote one Twitter user, sharing a picture which shows a blanket of white over the city.

Remember childhood days when I would get asthma attacks in Winters

Where will we stop?

If govt sincerely cares, its high time to act tough!@moefccpic.twitter.com/ltCMX6c6Sq

These before and after Diwali photos of Delhi show exactly how bad the air quality in the city is. #DelhiSmog#RightToBreathe#DelhiAirQualitypic.twitter.com/9s15Joalqq

Delhi:
1. Before Diwali.
2. After Diwali. pic.twitter.com/1SjE0HTvVD

No Joke here. First picture is before Diwali firework second after firework. This is third dayin Delhi after Diwali without Sun. pic.twitter.com/YFDnTxmfJE

Delhi before and after diwali.

Delhites fighting for bursting the fire crackers are actually fighting to feed a diabetic man, with extremely sugar, four glasses of Mcflurry with Oreos.

Ps: Mcflurry with Oreos is sweet as death. I recommend. #DelhiPollutionpic.twitter.com/vyzjYGzdyy

The air quantity index, which takes into account five chief pollutants including PM10 and PM2.5, was recorded at 416 towards noon on Wednesday, according to the Central Pollution Control Board.

Delhi Chief Minister Arvind Kejriwal has appealed "with folded hands" to the Punjab and Haryana governments to put an end to stubble burning. The government will start distributing 50 lakh N95 masks among school students in Delhi from Friday, he added.