"Give this man a raise," someone tweeted 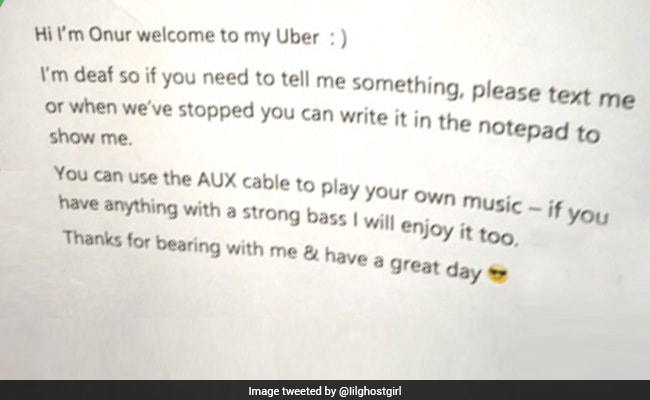 Twitter user @Iilghostgirl tweeted an image of a note the cab driver shares with all his passengers.

More often than not, cab rides are routine with no unexceptional experiences. It's just a way to get from point A to point B - often with little to no conversation with the driver. However, one woman's rather exceptional commute thanks to her Uber driver has gone all kinds of viral.

Seated in the backseat of her Uber, Twitter user @Iilghostgirl tweeted an image of a note the cab driver shares with all his passengers. The heartwarming note, posted on April 18, has collected over 5.4 lakh 'likes' and more than 1.3 retweets - and still very much counting.

THIS WAS THE PUREST THING WE LOVE ONUR pic.twitter.com/YkWCXjQYAt

ONUR!! thank u for an amazing uber ride. you blew up twitter !!

Even Uber is proud of its driver

Someone also tweeted this video:

some really useful things to learn in these cases is "Thank You" and Yes and No. Im taking ASL for these instances becuase so many instances where you need to communicate. Deaf people are useally pretty used to having to find a way to communicate but they appreciate the effort. pic.twitter.com/vWEa9eSBTk

The note has gone insanely viral and collected quite a few reactions from people on Twitter.

This has made our day!! Thanks for all the comments our whole family has been having a great time scrolling through BTW yes he is deaf, you don't need your ears to drive, flashing lights are used by emergency services for a reason & ofc he doesn't text & drive x

Give dis man a raise

Most uplifting tweet I have seen in a LONG time. Thanks for sharing.

Didn't this just make your day?Click for more trending news