The cyclist chased the dog for nearly 600 metres 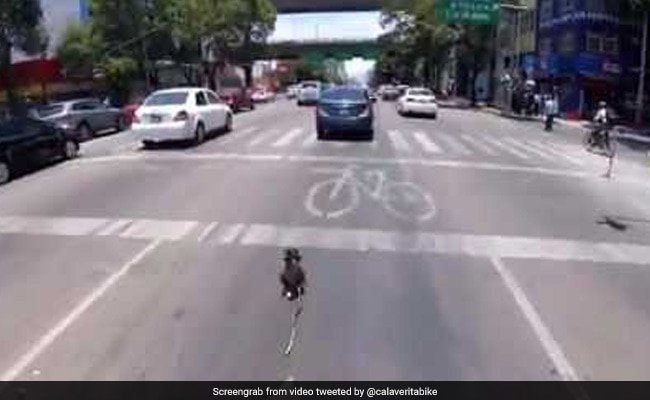 A runaway dog took a cyclist on a wild adventure down a crowded road as the latter had to chase it for over half a kilometre. Ironically, it wasn't even her dog.

The cyclist was riding down a busy road in Mexico when she spotted the little dog running towards traffic with its leash still attached to the collar. She immediately started following the dog in order to save it from the oncoming cars.

In the 2-minute long video taken from the cyclist's helmet camera, the dog is nearly run over several times while speeding through traffic. The cyclist frantically keeps chasing the undeterred pooch that keeps running tirelessly for several blocks.

The cyclist, who can't be seen in the video, asks bystanders for help to catch the runaway canine. After several close calls and multiple attempts by people, one man walking on a street grabs hold of the dog's leash.

"Gracias," the cyclist thanks the man after the exhausting chase.

The cyclist won lots of praise online for rescuing the dog from a potentially dangerous situation. Within a day, the video was shared over 9,300 times on Twitter.

Promoted
Listen to the latest songs, only on JioSaavn.com
It's not mentioned why the dog ran away but the video says she eventually found its owner.

Another person posted surveillance footage of the cyclist pursuing the dog.

A Mexican airline even honoured her with some free air tickets.

And for the dog, hope he doesn't run away again.Click for more trending news