Cycle Chakki: This "Jugaad" To Grind Flour While Exercising Is Viral 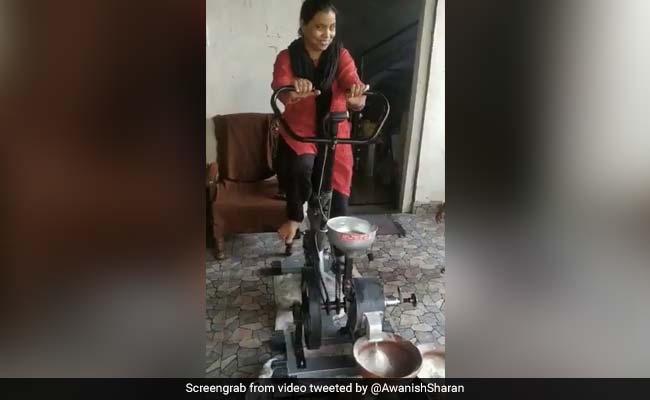 A woman can be seen using a modified gym cycle to grind flour in this viral video.

A video of a woman using a gym cycle to grind flour is going viral online, and the Internet can't stop praising the brains behind the jugaad. The short clip was shared on social media by IAS Awanish Sharan, who praised it as a "gazab ka aavishkar" or "mind-blowing invention".

In the video, a woman can be seen using a modified gym cycle. The stationary bike is fixed to an apparatus that grinds flour while she pedals - creating a system where work gets done while she gets her daily dose of exercise too.

A voice, off camera, can also be heard explaining the many advantages of the cycle flour mill in the video. "It's good for your health too. You can exercise while grinding wheat," one woman explains in Hindi as the camera shows another one demonstrating how the cycle chakki works.

"Work and exercise together," wrote Mr Sharan while sharing the video. "The commentary is also fantastic."

Since being shared online, the video has garnered over 6 lakh views and more than 4,500 'likes'.

Many Twitter users praised the modern chakki as yet another example of jugaad - a Hindi word which roughly means a clever hack and is often used to signify the Indian spirit of resourcefulness and enterprise.

"Very good idea," wrote one person in the comments section.

Many also asked where they could purchase the cycle chakki.