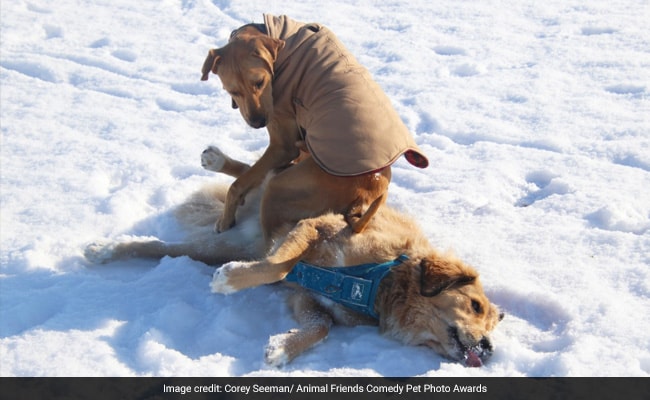 The Comedy Pet Photo Awards 2021 have revealed the finalists for this year's edition of the competition, with 40 images making the shortlist. Among the most amusing pictures from this year are a two chicks discovering their own shadow, a dog using another as a seat, a laughing horse and several photobombing animals. These images were chosen from among 2,000 entries submitted from all over the world. Created by Paul Joynson-Hicks and Tom Sullam, the Comedy Pet Photo Awards aims to celebrate the positive role of pets in our lives and raise awareness about animal welfare.

This year, the competition has partnered with Animal Friends Insurance and will be donating 10,000 pounds to Animal Support Angels.

Here is a look at some of the funniest entries to Comedy Pet Photo Awards 2021:

Paint me like one of your French girls! By Anna Chambers

Crazy in love with fall by Diana Jill Mehner

A little massage by Christine Kaltenecker

Embrace of love by Svetlana Pisareva

A Warm Spot on a Cold Day by Corey Seeman

The Eureka Moment! By Sophie Bonnefoi

You can check out the complete list of finalists here.

The winners of the competition will be announced in November, with the top image winning a cash prize of 2,000 pounds, a trophy and a goodie basket.