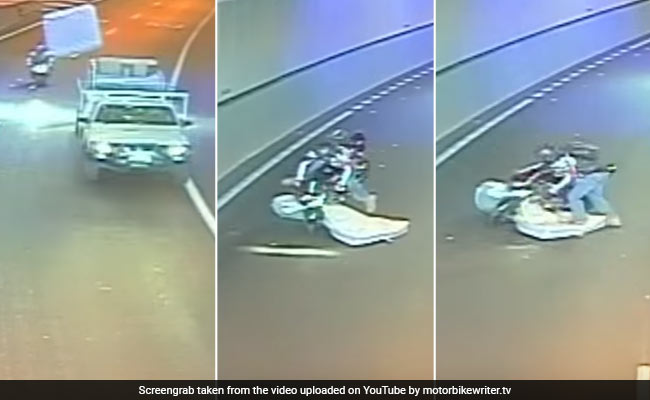 New Delhi: A large mattress that was not properly secured to the back of a truck caused a motorcycle accident but also broke the biker's fall in Australia. The entire incident was captured on a surveillance camera.

Aaron Wood was riding his motorcycle through a tunnel in Brisbane, Australia last week when one of two mattresses flew off the back of a truck in front of him. He swerved to the next lane but the mattress got lodged in the front tyre of his bike, causing it to flip up briefly. Luckily, he landed on the mattress, which broke his fall. The driver of the truck drove away without stopping. Mr Wood was able to walk away from the accident with only a few minor cuts on his hands.

"The mattress went under the bike and flipped me up onto my front wheel," Mr Wood told the Queensland Times.

"When I stopped I realised I had torn the grips right off the handlebars - I thought I was a goner for sure," he said.

"I was just very lucky to come out unscathed - apart from some cuts to my hands," Mr Wood said. "The police are amazed that I am alive."

Fortunately, Mr Wood was not rear-ended by the car behind him. Instead, the people in the car helped him dislodge the mattress from his bike and moved it out of the middle of the road.

"I have been riding for 20 years and never had something like this happen," he said.


Promoted
Listen to the latest songs, only on JioSaavn.com
According to reports, Queensland police traced and fined the driver of the truck 275 Australian dollars.