Caught On CCTV: Close Call For Karnataka Scooter Driver In Crash With Bus 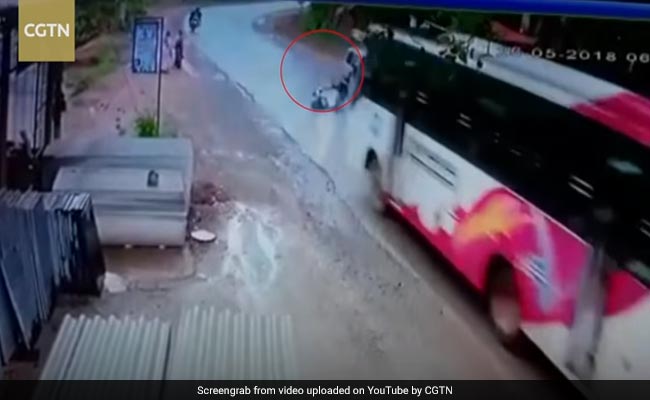 A scooter driver from Karnataka's Vitla is lucky to be alive after his two wheeler was crushed under a speeding bus. His narrow escape was caught on CCTV. Surveillance footage posted on YouTube by CGTN captures the exact moment of the crash, which took place on Saturday.

The man on the two-wheeler appears in the frame as he is coming around a bend. It seems as if he is gearing up to overtake a minivan on his left-hand side. That's the moment a large white bus suddenly appears. It is speeding towards the scooter driver from the opposite side of the road.

Reacting fast, the man can be seen swerving hard; this sends his two wheeler crashing to the ground. Then both disappear as the bus rushes past the CCTV.

As the bus screeches to a halt, the stunned man appears back in the frame. He's collecting himself and getting up of the ground. It appears he is uninjured. A few people rush of the bus to check on him, as to a few bystanders, but it appears he is safe.

Watch the dramatic CCTV footage below:

His scooter, on the other hand, appears to have been crushed under the bus. Still, there's no denying that this was an incredibly lucky escape for the scooter driver. Click for more trending news