Caught On Camera: The Lightning Strike That Shut Down A Disney World Ride 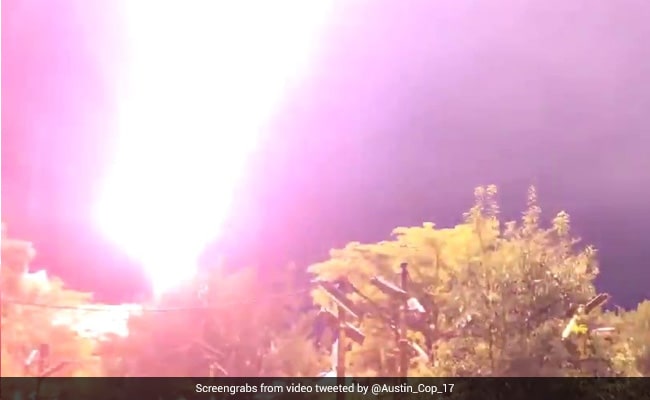 A massive lightning strike was caught on camera by a guest at Disney World.

A visitor at Walt Disney World Resort in Florida has captured on camera a massive lightning strike that temporarily shut down a ride at the theme park.

Austin Coppock, who posted video of the lightning on social media, told ABC News that he saw the bolt of lightning near the Millennium Falcon and marketplace in Galaxy's Edge - which is the Star Wars-themed area within Disney's Hollywood Studios.

According to a WDWNT report, Disney's 'Star Wars: Rise of the Resistance' ride did not operate on Tuesday due to issues with a blown power generator. All Disney parks have an extensive lightning rod system in place, designed to sustain extreme weather conditions, the report added. The ride has since reopened, and operated as usual on Wednesday.

Mr Coppock said that his 10-second clip of the lightning was cut off because the "boom of the thunder shook the ground" so he let go of the recording button. On Twitter, he described the scene as "pretty crazy" while sharing the incredible footage. Watch it below:

The footage has collected over 99,000 views on the microblogging platform, along with hundreds of amazed comments and reactions.

"Wow that had to terrifying and awesome at the same time!" wrote one Twitter user in the comments section.

"What an incredibly timed capture, Austin. Amazing!" another remarked.

According to ABC News, there were no immediate reports of damage or injuries after the lightning strike.

The Video That Anand Mahindra Watches Before Every Independence Day