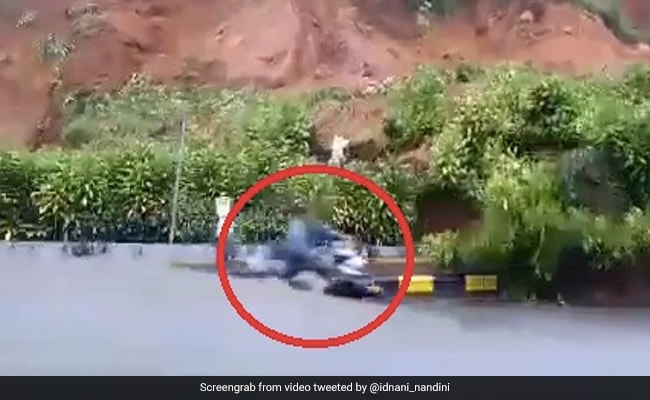 A scooterist's narrow escape from a landslide in Indonesia.

An old video that has resurfaced on social media and captured people's attention again shows the moment a scooterist narrowly avoided getting trapped under a massive landslide. The landslide occurred in Indonesia in April this year, and the shocking video has since gone viral multiple times on social media with different claims. Recently, it was widely shared over messaging platforms like WhatsApp with claims that the incident took place in Goa, and earlier, it had been circulated as a video from Meghalaya.

According to Metro TV news, the landslide actually occurred on April 9 near the settlements of Chiangjur and Sukanagara in Indonesia this year.

The video shows a man on a scooter managing to escape in the nick of time as a piece of elevated land caves in and falls on the road. The man was filmed abandoning his two-wheeler and rushing to safety to avoid getting buried under the land. His scooter, however, was seen getting completely buried under the avalanche of mud.

"Omg!!!! What a narrow escape for that biker," wrote Twitter user Nandini Idnani while sharing the video on Twitter this Sunday. Take a look at it below:

Omg!!!! What a narrow escape for that biker pic.twitter.com/W9eX0kBZzd

Since being posted on the microblogging platform, the video has collected nearly 30,000 views and a ton of shocked comments.

"Providential escape that is," wrote one person in the comments section. "Thank god the biker survived," another said.

In a statement published in May, Meghalaya Police had also confirmed that the landslide took place in Indonesia, contrary to some claims that it happened in Meghalaya.

A video clip of a Landslide which is being circulated on social media is from settlements of Chiangjur & Sukanagara in Indonesia, NOT from National Highway of Meghalaya.

We request citizens not to share or circulate the video clip with false content or caption. pic.twitter.com/evQ3UvZm0F

"A video clip of a Landslide which is being circulated on social media is from settlements of Chiangjur & Sukanagara in Indonesia, NOT from National Highway of Meghalaya," the police department said in its statement.