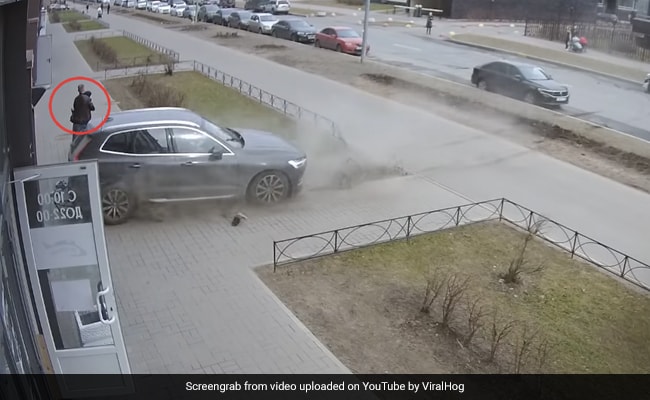 A father dragged his son out of harm's way in Russia.

A heart-stopping video has captured the moment a father saved the life of his four-year-old by grabbing him and dragging him away from a car barreling their way. Surveillance footage captured the scene outside a store in Russia when an out-of-control car backed into the pavement on which the father and son were standing.

The incident occurred in St Petersburg on April 14.

Footage that has been widely shared on social media shows the moment when a car starts backing abruptly. As the car gains speed, the driver appears to lose control and, trying to avoid a collision with other cars, drives onto the sidewalk, demolishing obstacles.

It could have been a serious accident for the four-year-old standing outside a grocery store, but the day was saved by his father. Footage shows the quick-thinking dad grabbing his son and dragging him away with just moments to spare before the car crashed right where they were standing.

The video has been viewed thousands of times on YouTube, where many praised the father for his presence of mind.

"Great grab, Dad!" wrote one viewer, while another said, "What's the odds an out of control car would aim at them. That's what you call being at the wrong place , at the wrong time."

In 2016, an American father was hailed as something of a superhero after his exceptionally quick reflexes helped save his son from a rogue baseball bat headed straight for his face.