The sea mammals, however, are undeterred by its aggression and focus on the food that is coming their way. 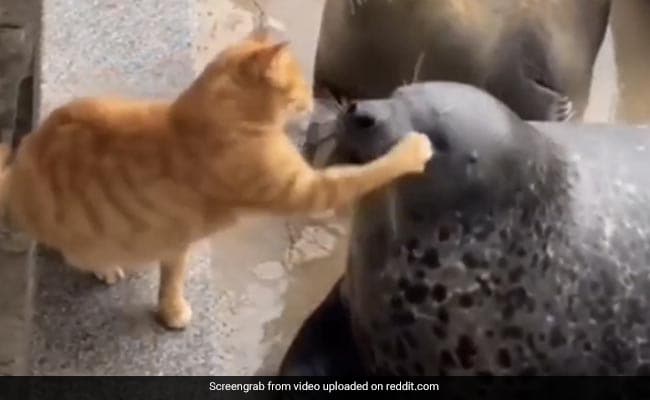 Animals are obsessed with food and are unable to mask their love for it. And they become aggressive when it's about something they like. A video showing a cat's angry response to a bunch of seals is a perfect example of that. It shows a handler throwing pieces of fish towards to seal and they catch them before the cat could do anything. So, the angry feline is seen slapping the large sea animals. The video has been posted on Reddit where it received more than 33,000 upvotes.

The cat is seen repeating the routine whenever a seal catches the fish. But the sea mammals are undeterred by its aggression and focus on the food that is coming their way.

The video appears to have been taken at a marine park and shows a number of seals lined up to eat the meal. In this huge gathering, all the cat is able to do is look at the seals devouring their favourite fish.

As the trainer throws the food pieces towards other seas, the cat is seen walking towards them and showing its anger, but it is ignored.

"No matter who gets the fish, the first seal gets the business," one Reddit user commented. "'Here's your snack'. 'And here's your slap'," said another.

This is not the first time that a cat has been captured doing something like this. A Twitter page called @DontShowYourCat shared a video a few months ago that showed a seal coming to the cat and making loud noise. The act angered cat and it slapped the mammal hard.

Embarrassed, the poor seal went back to the water in shame.