Cat That Invaded Pitch, Stopped Football Match Had Been Missing For Months

The cat has been taken to a vet to be examined. After scanning the animal’s microchip, the vets called the owner to inform her that the pitch invader was her cat 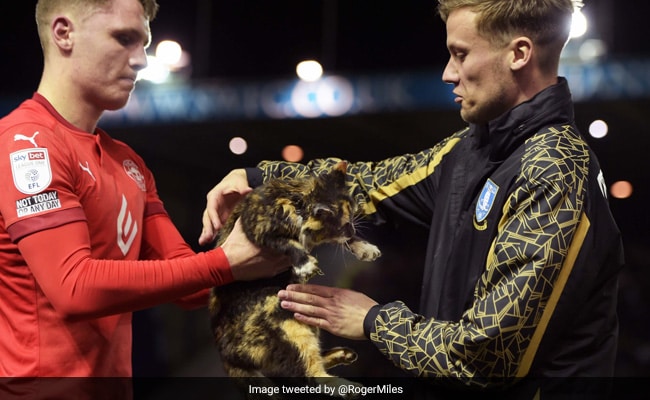 The pitch-invading cat had gone missing from her home

A cat which stopped an English Football League match with an impromptu pitch invasion on the night of February 8 had been missing for months and presumed dead by its owner. Had the cat not invaded the pitch, stopping the match between Sheffield Wednesday and Wigan Athletic at Hillsborough Stadium, Yorkshire, the animal's owner may not have known that it was still alive. Topsey, the cat, ran onto the pitch and was eventually caught by Athletic footballer Jason Kerr, who treated the feline gently and took it out of harm's way. A video of the invasion has gone viral on social media and has been watched more than 1.6 million times on Twitter.

However, Mr Kerr had to struggle to get hold of the cat. The video showed him running after the animal, with the cat evading attempts to be captured. After being caught, Topsey was taken to a vet to be examined.

Cat on the pitch at Hillsborough pic.twitter.com/0uJ67slQ9P

A woman, Alison Jubb, who claimed to be Topsey's owner told BBC that while watching the game, her daughter-in-law had called her to say that there was a cat on the football field. She added that she just laughed it off. However, after the vets scanned the cat's microchip, they called Ms Jubb to confirm that the pitch invader was actually Topsey.

Now, Ms Jubb can't wait to see her cat again. She said Topsey had gone missing last year in June. While Ms Jubb was delivering the cat to a cattery, Topsey escaped from the cat box. Since then, the family had never heard anything about the cat.

Meanwhile, the video of the invasion has got immense traction on social media. More than 1.6 million people have watched it so far and a number of them reacted with affection and surprise. Some also appreciated Wigan Athletic for taking care of the cat.

Several people compared Mr Kerr's delicate handling of the cat with West Ham footballer Kurt Zouma, who was seen kicking his cat in video footage a few days ago.

Wait a meowment. Youve got to be kitten me. Was he a fur-midable opponent or was he clawful? Its fur-tunate that your players was pussy footing around it and being nice, if Zouma would have been there it would have been a cat-astrophe.

“Good job it wasn't at West Ham,” said another user.

A Daily Mail report also shared a Facebook post dating back to June that showed shows one of the posts made by the owner in June 2021 in search of the cat.

As per the BBC report, the cat has suffered some injuries on its neck. Ms Jubb believes a dog may have grabbed the cat and shaken her, and that she has bites on her neck as a result. Ms Jubb went on to say that an x-ray was needed and till then “we don't know (whether she'll make it)”.

The vets said they had administered antibiotics, and that the cat was stable.