Read inOther Languages
This Article is From Oct 21, 2019

Can You Spot The Deadly Snake Lurking Near Children In This Pic? 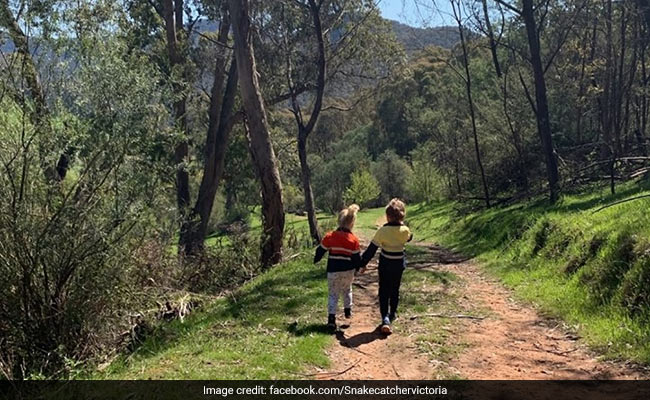 A snake is just inches away from the two children in this photograph.

A picture of two children ambling just inches away from one of the world's deadliest snakes is being used to deliver a lesson on how to act appropriately around wildlife. In the picture, which was shared to Facebook by Snake Catcher Victoria Australia, two children are seen on a dirt track in Eskdale on the Mitta Mitta river, reports Yahoo News. A large and highly venomous eastern brown snake lurks just inches away from them.

According to The Sun, the photo was taken on Monday by the children's mother. It was sent to Snake Catcher Victoria Australia by their grandfather, who wanted to use it as an opportunity to explain how to handle snake sightings.

Snake Catcher Victoria Australia wrote that the snake in this particular picture saw the children coming and "watched as they unknowingly skipped past."

"Really goes to show that snakes are not aggressive and just need respect," the snake-catching service said.

Can you spot the snake in this pic?

No luck finding the snake? Here is a zoomed-in version of the photograph, where the snake can be seen towards the right.

The picture has collected over 3,000 'likes' and a number of shocked comments.
However, Barry Goldsmith, who runs Snake Catcher Victoria Australia, told Yahoo News that the viral pic highlights how snakes won't attack or chase people until they are antagonised.

"He wasn't surprised by them and pulled back and got out of the kids way," he said.

Eastern brown snakes are the world's second most venomous snakes - and this is not the first time that one has made people shudder by camouflaging itself perfectly with its surroundings. Can you find the eastern brown snake blending in effortlessly with a pile of sticks and leaves in this pic?