Read inOther Languages
This Article is From Jun 15, 2020

Can You Identify What This Viral Pic Shows? Twitter Is Confused

The picture was shared on Twitter by Indian Forest Service officer Susanta Nanda. 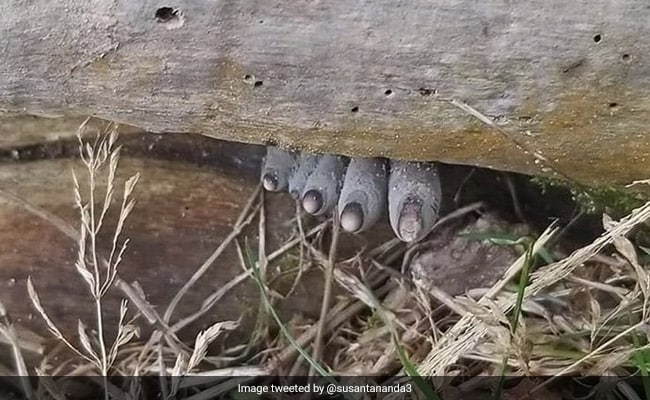 Can you identify what this picture shows?

A picture that is going viral on Twitter appears to show a foot peeking out from beneath a log of wood. It appears to feature five toes, complete with nails - but of a hue that is not readily found in humans or animals. Instead, the foot appears to be bluish-grey in colour - a fact that has spooked many who tried to identify the species it belongs to.

The picture was shared on Twitter one day ago by Indian Forest Service officer Susanta Nanda, who challenged his followers to guess what it shows. "Can you identify this animal?" he wrote while sharing the pic on the microblogging platform, where it has collected a ton of responses.

Take a look and see if you can identify what the picture shows:

Can you identify this animal? pic.twitter.com/6WHc2cidRO

Since being shared on Sunday, the picture has collected over 1,000 'likes' and a ton of confused comments.

"It looks scary," a Twitter user wrote, while another said, "I want to erase this from my seen memory".

Many also tried their hand at guessing, and their responses ranged from langoor to chimpanzee to gorilla - all incorrect.

After a while, Mr Nanda shared the answer with curious followers and revealed that the picture actually features a type of fungus. "It's a fungus," sharing the link to a website that identified it as Dead Man's Fingers or Xylaria polymorpha.

According to Science Friday, the fungus has earned its spooky name because it looks like human digits rising from the forest floor. Dead Man's Fingers usually grows as two to five branches clustered together. Common in forests and wooded areas, it usually grows from decayed wood and rotting tree stumps.

Were you able to identify the fungus? Let us know using the comments section.