Over 2.5-million views for this hair-raising video 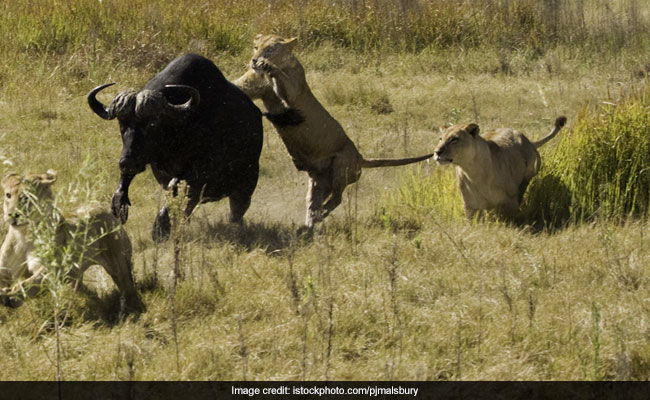 Watch who emerges as the winner in this lions vs buffalo vs crocodiles battle. (Representative Image)

A video that has gone massively viral with over 2.5-million views on Facebook shows a buffalo bull stuck in a hard place - between a pride of lions and a group of crocodiles. The video of the buffalo fighting off its predators was shot recently at the Kruger National Park in South Africa. The hair-raising incident was captured on camera by tour guide Thuli Khumalo, reports Latest Sightings by Kruger.

In the video, a pride of lions first appears on camera chasing a herd of impalas. Their attention, however, is soon captured by a lone buffalo bull standing at the water's edge. To escape their attack, the buffalo retreats into water - and right into the jaws of a crocodile.

Talk of being stuck between the devil and the deep blue sea! To find out what happens, watch the incredible video below:

"The buffalo decides that the water is probably more dangerous than land, where it can potentially outrun the pride of lions that are now waiting for him to re-emerge from the water," explains Latest Sightings.

So as soon as the buffalo re-emerges on land after fighting off the crocodile, he makes a run for it. Luckily for him, this story has a happy ending. Help arrives for the poor buffalo in the form of a massive herd of buffalos that chase the lions away.

"Even if the lions succeed in bringing one [buffalo] down without getting skewered by its horns, distress calls often draw the rest of the buffalo herd to the scene," explains Earth Touch News.