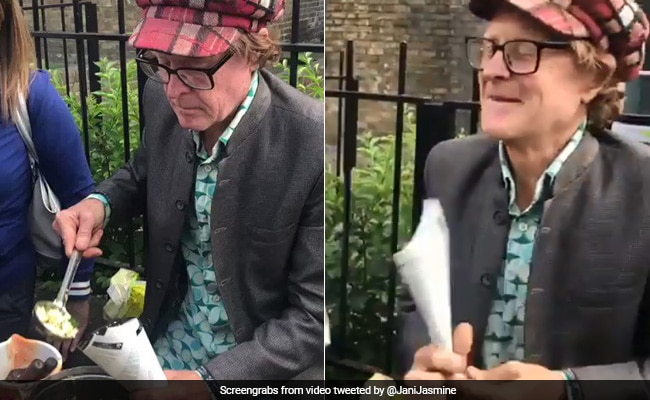 Angus Denoon served jhalmuri outside the Oval on Sunday.

Indian cricket fans attending the World Cup match on Sunday were surprised to find a British vendor selling jhalmuri outside the Oval in London. During the India vs Australia match, Indian fans in London found the man deftly chopping vegetables and making paper cones to serve the classic Kolkata street food. Of course, in no time at all, he had gone viral on social media, with thousands applauding his love for Indian cuisine. And among the many that gave him a shout-out on Twitter was none other than superstar Amitabh Bachchan.

Jhalmuri is a popular snack that, like its cousin bhelpuri, is made of puffed rice, spices and veggies.

The man was identified by many as Angus Denoon, a British chef who runs the Jhalmuri Express stall in London. Mr Denoon discovered a love for Bengali cuisine during a trip to Kolkata years ago, as he told NDTV in a 2016 interview.

Watch him in action outside the Oval:

Mr Denoon's jhalmuri stall received a lot of love from Indians on social media. Superstar Amitabh Bachchan praised him with a punny tweet:

Others also joined in to give him a shout-out

In fact, tweets on him were even curated into a Twitter Moment.

Mr Denoon has been treating Londoners to jhalmuri for about a decade now.