The couple has named the virtual ring or NFT "Tabaat" 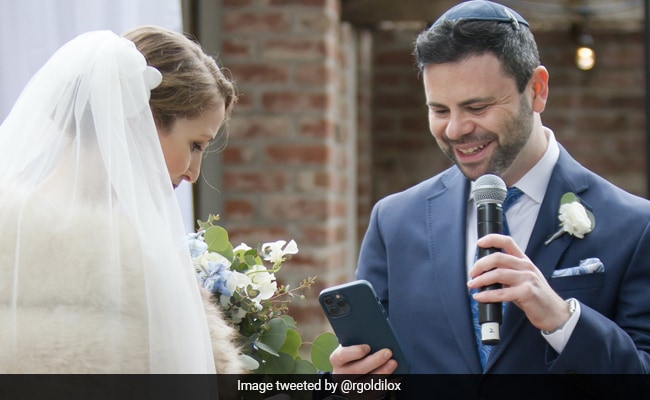 These days couples go to any extent to make their wedding memorable and stand out from the rest. One couple from California added a truly unique element while getting married - the duo exchanged virtual rings on their smartphones. The couple - both employees of the cryptocurrency exchange platform Coinbase - gave each other NFTs or non-fungible tokens as virtual rings to start their married life. Their wedding picture on Twitter shows Rebecca Rose and Peter Kacherginsky at the altar with their respective smartphones, exchanging the rings, though not traditionally. In the tweet, Rebecca proudly proclaims that they "got married on the #blockchain."

Most people get married in a place of religious worship, on a beach, or in the mountains. Peter (@_iphelix) and I are NOT most people. We got married on the #blockchain. 1/7 pic.twitter.com/2ExexrlLbZ

The couple has named the virtual ring or NFT "Tabaat", which is a Hebrew word for "ring." If you look up online for "Tabaat", you will see two tokens have been minted, and there is no provision to mint anymore.

Alongside their traditional Jewish ceremony, Rebecca, in a Twitter thread about the wedding, said that they wanted to solidify their "vows in a more personal way".

In addition to a traditional Jewish ceremony, we wanted to solidify our vows in a more personal way. Since we both work at @Coinbase, @_iphelix wrote an @Ethereum smart contract for our marriage that issued digital artwork as tokens (#NFTs) to our cryptocurrency wallets. 2/7 pic.twitter.com/uYB8MXGlgn

In further posts, she adds that they got married on March 14, 2021, at Gamble Garden, a non-profit organisation, that has herb and rose gardens, a historic home, a carriage house, and a tearoom. It was also "the location of our first date and where Peter proposed", tweeted Rebecca.

She also said that their virtual rings now existed on the blockchain "for all to see as proof of our commitment to each other", and share a screenshot of the Etherscan page.

In the last of her tweets, she wrote that as the blockchain, unlike physical objects, was forever, it was impossible for anyone to "censor, and does not require anyone's permission. Just as love should be."

The #blockchain, unlike physical objects, is forever. It is unstoppable, impossible to censor, and does not require anyone's permission. Just as love should be. What could possibly be more romantic than that? 7/7 pic.twitter.com/P0XC5uLjor

Well, two people in love finding a common passion and ensuring it became an integral part of perhaps the most important moment of their lives! We wonder what could be more romantic than that.