"I can't stand this routine of staying at home. It's horrible," said Brazilian President Jair Bolsonaro. 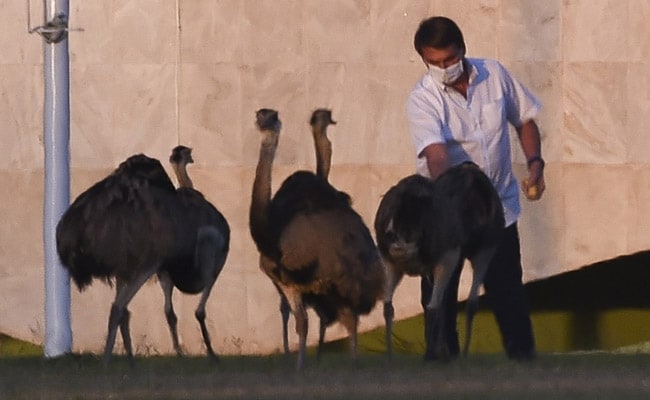 Brazilian President Jair Bolsonaro was bitten by a large bird after complaining of "horrible" quarantine on Monday. Mr Bolsonaro tested positive for COVID-19 last Tuesday and has been in isolation for a week now. While strolling through the grounds of his official residence on Monday, he decided to feed some large rhea birds, reports the Daily Mail.

However, the interaction soon made an already-bad quarantine worse for Mr Bolsonaro, 65, as one of the bird bit his hands in full view of the country's press.

The rhea is a large, flightless bird that is native to South America. Photos that are being widely circulated on social media show one of these large, emu-like birds pecking hard at Mr Bolsonaro's hand while he was feeding them. He was seen shaking his hand in pain after the incident.

According to the New York Post, Mr Bolsonaro has been quarantined at the official residence of the president of Brazil, Palacio da Alvorada.

On Monday, the Brazilian President had announced plans to take another test, saying that he could not stand being in isolation. He added during his interview with CNN Brazil: "I will wait quite anxiously [for test results] because I can't stand this routine of staying at home. It's horrible."

During his interview, President Bolsonaro said that he feels "very well" and has no fever or problems breathing. He also has not lost his sense of taste, one of the most common symptoms of COVID-19.

Brazil is the second-worst hit country in the world, after the United States.