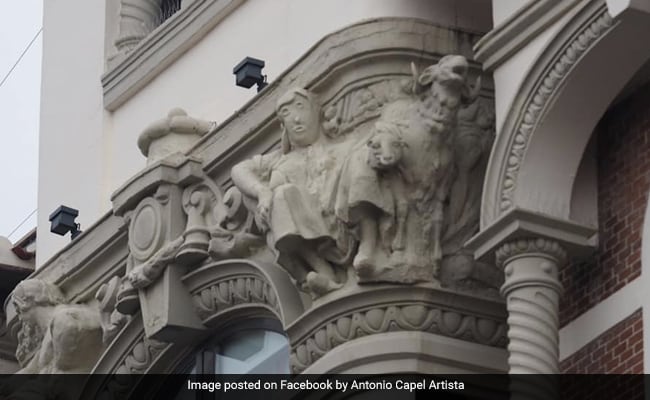 A statue in Spain has become the latest target of botched restoration attempts.

Some things are best left to professionals. A carved figure on a building in Spain has become the latest target of amateurish restoration. In the city of Palencia, a statue has been rendered almost unrecognisable after a botched restoration which has drawn anger and ridicule on social media.

According to local reports, the victim of the 'restoration' is a carved figure on the facade of an early 20th-century building. The figure once featured the face of a smiling woman next to some livestock - but now resembles a lump with two eyes and a mouth etched onto it.

"It looks like the head of a cartoon character," Mr Capel wrote. He rued that the city of Palencia now had an attraction to rival the fresco of Christ in Borja whose disastrous restoration went massively viral four years ago.

Mr Capel added that the bigger crime was committed by the person who commissioned the restoration.

The post has gone viral on social media, with the comments section being flooded with comments from people outraged at the amateur job.

Spain's Professional Association of Restorers and Conservators criticised the restoration on Twitter, writing, "THIS #IsNotARestoration."

Earlier this year, an attempt to restore a copy of a famous painting ended so badly, it was turned into an 'expectation vs reality' meme on social media. 'The Immaculate Conception of Los Venerables' is a painting by the Spanish baroque artist Bartolome Esteban Murillo which captured the Internet's attention after photos of its botched restoration surfaced online.