This Virgin Mary Painting Was 'Restored' So Terribly, It Became A Meme 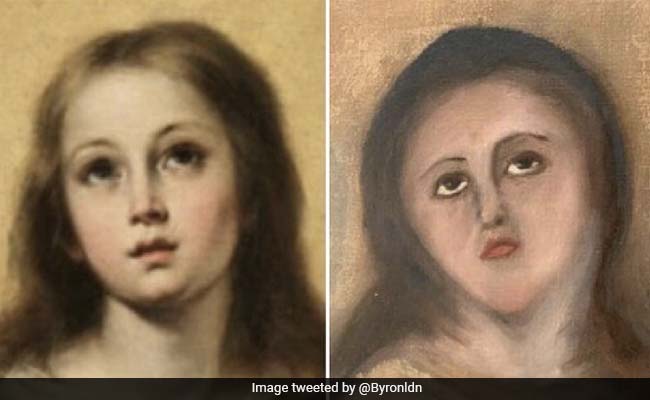 A botched restoration has become the subject of a ton of social media jokes.

A recent attempt to restore a copy of a famous painting ended so badly, it has been turned into an 'expectation vs reality' meme on social media. 'The Immaculate Conception of Los Venerables' is a painting by the Spanish baroque artist Bartolome Esteban Murillo which has captured the Internet's attention after photos of its botched restoration surfaced online.

According to Europa Press, an anonymous collector in Spain recently enlisted the help of a furniture restorer to clean up a copy of the famous painting. The collector from Valencia, however, was left shocked when he saw that two attempts to restore the copy of the 17th century painting ended up disfiguring it completely.

Photos of the painting - 'restored' beyond recognition - have left social media users horrified and amused in equal parts. Take a look:

Life is tough, and much is depressing, but I will still laugh to the point of tears at a botched restoration of a painting. pic.twitter.com/fWtETDEqTs

Photos of the "terrible" restoration resulted in a ton of memes on social media:

To many, the botched restoration brought to mind the infamous "Ecce Homo" fail of 2012. In that case, an elderly widow in a tiny Spanish town decided to restore a church fresco of Christ. The result was so disastrous that it went viral and she became a global laughing stock.

According to the New York Post, the Spanish art collector who commissioned the restoration reportedly paid around $1,350 for it. He has now contacted a professional to try and restore the painting properly.

The incident has resulted in conservation experts in Spain calling for a tightening of the laws covering restoration work.

Maria Borja, a vice president of the Valencia chapter of the Professional Association of Conservative Restorers of Spain, said to Europa Press that instances of botched restorations are much more common, but only a few make the news.

"There are a multitude of situations where the works are intervened by people without training... This type of non-professional intervention can cause irreversible changes," she said.