Over 4 million views for this 'smashing' performance 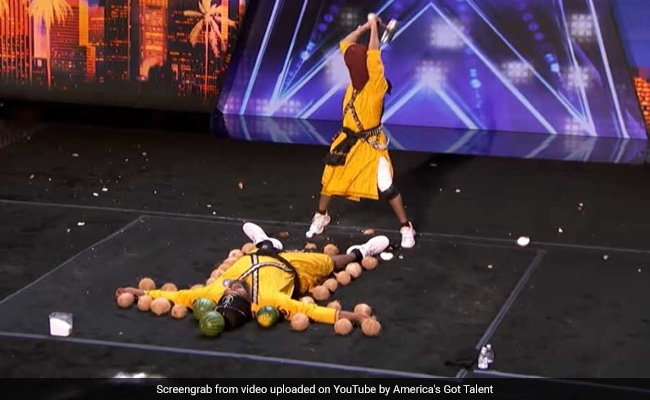 Just days after V.Unbeatable's power-packed performance won over the judges of 'America's Got Talent', another Indian group has left them, and viewers, completely stunned. The Bir Khalsa Group attempted and aced a stunt on the American show that left everyone with their hearts racing.

For the stunt, one member of the group, Jagdeep Singh, lay down on the floor with coconuts and watermelons placed all around him. Kawaljit Singh, another member of the group, then proceeded to smash all the melons and coconuts - with a blindfold on! The daring act was completed without a single misstep, with no injuries, leaving viewers gasping in fear.

"This Danger Act From India Will SCARE You With A SMASH!" wrote America's Got Talent while sharing the video on social media platforms.

Since being shared online, the impressive performance has been viewed over 4 million times on YouTube alone.

"'How dangerous you want this act to be?' Both of them - 'Yes'" quipped one person in the comments section. "The most insane and awesome performance yet at AGT 2019!" wrote another. "I'm shaking, scared and laughing at the same time while watching this," a third added.

The Bir Khalsa Group has impressed talent show judges and fans earlier as well. The group, in fact, holds a Guinness World Record for the most number of coconuts smashed while blindfolded.

What did you think of Bir Khalsa's performance? Let us know using the comments section.