More than 5,000 Facebook users have shared the post and 6,000 have commented on it, with many of them referring to what they felt was shot wrongly 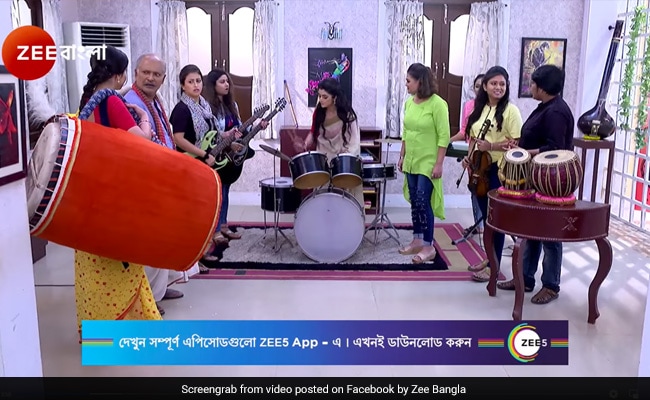 Jomuna Dhaki: A scene from the TV serial shows the lead playing drums while standing.

A scene from a popular Bengali TV serial is going viral for all the wrong reasons. It shows the lead actor of the show Jomuna Dhaki, who is portrayed as a gifted drum player in the drama series, playing drums while standing. A slight oversight or a possible shorthand by the makers of the show has become a rallying point for criticism and trolling by social media users. Jamuna's amateur hand movements, which appear completely out of sync with the beat, did not help build the show's credibility with the audience either.

More than 5,000 Facebook users have shared the post and 6,000 have commented on it, a number of them referring to what they felt was shot wrongly for the scene. The video has been viewed 1.3 million times.

“Oh my God. Best drummer,” said a user named Rajdeep Biswas, adding sarcastically in Bengali that no other drummer could beat the tunes like her.

“Pretty sure she can play double pedal without having to use her feet. Brilliant,” said Sharothi Sen Gupta, referring to double-kick drumming, which involves both the feet to play faster, more complicated beats, fills, and solos.

One user also referred to other actors in the scene. The video showed these actors, likely budding musicians, identifying the “reality show champion Jamuna Dhaki”.

Naima Jahan, another Facebook user, added, “Look at their acting!! Looks like they were forced to do acting.”

Another user, Beas Banerjee, felt that there was no coordination between the hand movements and drum beats, adding that though the actress was beating drums while standing, yet the bass sound was incredible.

A user named Avishek Bhattacharjee said he was disappointed that the TV network, which hosts a popular music reality show, “approves stuff like this”. “It's utter disrespect to every musician who is involved in the show! All this no-brainer content might get you views and shares but all that you guys are getting is a loss of respect. I hope you guys approve better content!” he added.