Barack Obama Ate Here In 2016. Now Restaurant Has Put His Table On Display

The 2016 dinner cost the two guests a mere $6 and it was Anthony Bourdain who paid. 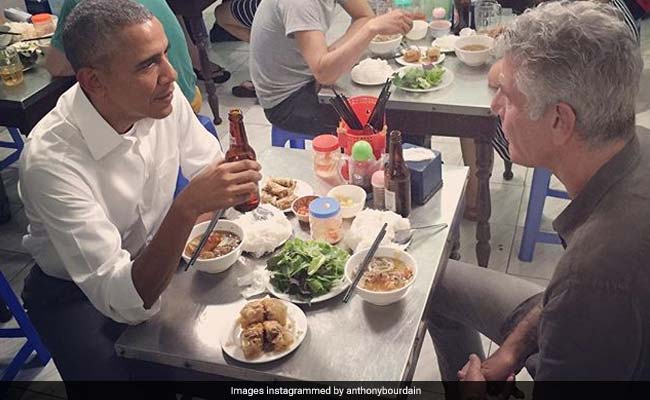 In May 2016, while he was still US President (ah, the good days), Barack Obama dined at a restaurant in Vietnam with American chef and TV personality Anthony Bourdain. The two savoured Vietnamese staples like grilled pork and noodles with cold beers at Hanoi's Bun cha Huong Lien restaurant for the season 8 premiere of Mr Bourdain's show 'Parts Unknown'.

On Facebook, the restaurant still proudly flaunts the high-profile visitor at every place possible - including their profile picture and cover photo. Even the restaurant's user name on Facebook includes Barack Obama in it - "bunchahuonglienobama" - as does its description that name drops the former US President. But perhaps all that still wasn't enough as the restaurant decided to immortalise the table where Mr Obama ate with Mr Bourdain in 2016 by putting it on display.

Complete with bowls, chopsticks and empty beer bottles, the famed table has been put on display in a glass box and placed against a wall in the restaurant.

Anthony Bourdain posted an image of the table on his Instagram profile.

Promoted
Listen to the latest songs, only on JioSaavn.com
"Not sure how I feel about this," the chef wrote about the restaurant's gesture.

According to Today, the local eatery also introduced a special menu in Barack Obama's honour called "Suat an Obama" which translates to "Order like Obama". The special menu includes spring rolls and bun cha noodles with some local Hanoi beer.

The President's chopstick skills are on point . #buncha #hanoi