Read inOther Languages
This Article is From Jun 17, 2020

Backflip On The Edge Of A Cliff: Viral Video Has Twitter Divided 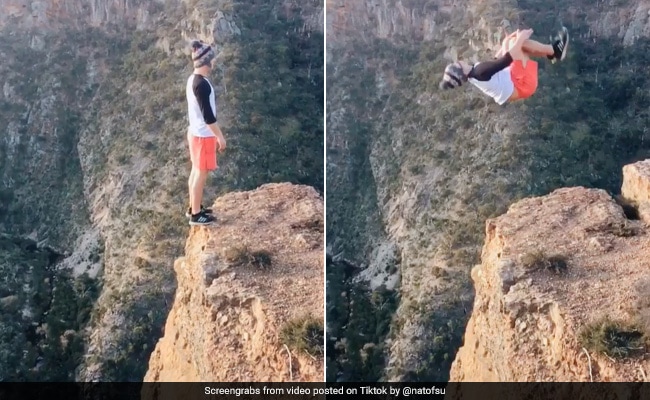 A viral video shows a man performing a backflip on the edge of a cliff.

A heart-stopping video that shows a man performing a dangerous stunt has divided opinions on Twitter. The old video resurfaced on the microblogging platform after being tweeted by businessman Harsh Goenka on Tuesday, who wondered if the stunt should be admired or considered foolish.

In the video, a man is seen performing a backflip while standing on the edge of a cliff. The man, wearing a pair of shorts and a white T-shirt, casually performs a backflip and lands expertly on his feet. He then flashes a victory sign for the camera before the short clip ends.

"Just wondering if his act is to be admired or considered as stupidity!" wrote Mr Goenka, chairman of RPG Enterprises, while sharing the video on Twitter.

Take a look at the stunt below. It goes without saying that you should not try this stunt on your own, should you ever find yourself on the edge of a cliff.

Just wondering if his act is to be admired or considered as stupidity !pic.twitter.com/HLsqAy6UBY

The video has been viewed over 63,000 times on Twitter. Mr Goenka's tweet has also started a debate around whether the stunt is stupid or admirable for the performer's daredevilry.

Singer Adnan Sami was among the hundreds of Twitter users who joined the discussion - and he classified the backflip as an act of great stupidity. "Maha Stupidity of Export Quality!!" Mr Sami wrote in the comments section.

Maha Stupidity of Export Quality!!
This clip should be used as part of an Anti-Weed advert!

Many others agreed with his assessment.

"Stupidity. No matter how the video ends," wrote one person. "The person doing the act and the person recording the video define irresponsibility," another said.

There were also some who were impressed by the backflip and called the stuntman a risk-taker.

He survived so we can admire if wouldn't have it would have been stupidity ????

Admire. He is a risk taker - calculated risk. Same way I invested in my savings into my entrepreneurial business ... running it since 10 years. Owners pride - neighbors envy's

The video was also shared on TikTok last year, where it collected nearly 30 million views and more than 24,000 amazed comments.

Where do you stand on the debate? Let us know using the comments section.