"Many women do this daily, but it is so normalised that we don't talk about it at all," says David Moinina Sengeh. 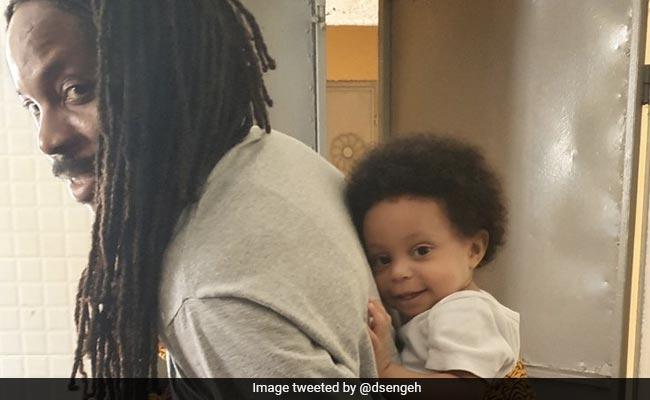 David Moinina Sengeh shared a photo of his 10-month-old daughter tied to his back.

A minister in Sierra Leone has started a conversation around gender roles after joining a Zoom meeting with his 10-month-old daughter. David Moinina Sengeh shared a photo of his daughter tied to his back on Twitter, where it has gone viral with thousands of 'likes'. He told BBC that he wanted to set an example for other men by sharing the photograph.

"Many women do this daily, but it is so normalised that we don't talk about it at all. If it was my wife who did it then this would not have been a viral tweet," the education minister of Sierra Leone told BBC from the country's capital Freetown, which is under partial lockdown to contain the spread of coronavirus.

He explained that it was rare to see a child on its father's back in the West African country, but the sight of a woman carrying a baby on her back would be taken as normal.

"As Minister, I started my last call feeding my 10 month old, then carried her on my back for the rest of the call," Mr Sengeh wrote while sharing his picture on Twitter. He added that the presentations helped his daughter fall asleep.

Working from home? How did u join your last zoom call? As Minister, I started my last call feeding my 10 month old, then carried her on my back for the rest of the call. The presentations helped her sleep. I invite you to share with the world how you worked from home as a leader. pic.twitter.com/wrkDwu58B5

Since being posted on the microblogging platform, the picture has collected over 7,000 'likes' and a ton of appreciative comments, with many in the comments section praising the 33-year-old for raising the issue of gender roles and leading by example.

This is great! I think we men in SL should not only be fathers by name but should contribute to the daily upbringing of our kids. It's fascinating seeing a minister displaying equality!!! I look forward to having my own kids and sharing their daily lives.

Dr. Sengeh, thanks for helping to reshaping the gender narrative in Sierra Leone. Your have shown to be a real progressive leading by example.

"I have friends who have never ever changed a diaper and they have several children, and they don't even understand how that is possible," said Mr Sengeh, adding that he hoped the photo would force me to "think about themselves".