And The Gold For The Best Hairstyle At Tokyo Olympics Goes To...

At the Olympics, some athletes are sporting incredible hairstyles that are stealing the limelight 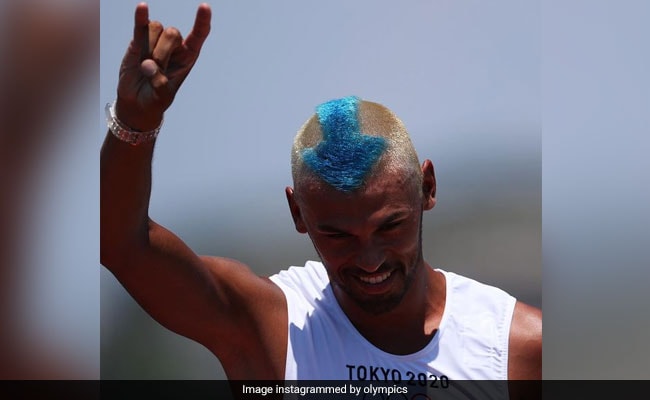 Tokyo Olympics 2020 is a show-stealer in many ways. Be it the skilled athletes putting up their best performance or funny videos going viral from the Games, this tournament has had us hooked right from the start. At the Olympics, some athletes are sporting incredible hairstyles that are stealing the limelight. The organisers themselves are impressed by the style statement that these athletes have brought with them. They tweeted about this sensation on their official page today. Whether sporting bright pink dyes or partly shaving off hair to make a logo of Olympics, these athletes have our eyes.

For Naomi Osaka from Japan and Shelly-Ann Fraser-Pryce from Jamaica, their hairstyles are all about the colours red and white - the colours used in Japan's flag. American footballer Meghan Rapinoe is sporting a purple shade on her short hair. Meanwhile, the Dutch windsurfer Kiran Badloe is reminding us of Avatar: The Last Airbender with his barnet hairstyle.  We also saw a glimpse of a barnet hairdo that had the Olympics logo on it.

The organisers wrote in the caption, "The content you didn't know you needed. These Olympians showed up to win and to look good doing it. Whose Olympics hairstyle do you think deserves a gold medal?"

These Olympians showed up to win, and to look good doing it! Who's #Olympics hairstyle do you think deserves a gold medal?

Reactions to the post are many and they are commenting about their choices. One user commented preferring "the last one," which is Meghan Rapinoe's photo.

I loved the last one

Others are going with Naomi Osaka's red and white mane.

I'd go with Osaka

Kiran Badloe's hairstyle was too stark for anime lovers to miss. They wrote The Last Airbender, clearly showing who they are voting for. Another quote tweeted about the same "head tattoo." The blue heart is a way to show their allegiance to the hairstyle.

It's the Air Bender head tattoo hair for me ???? https://t.co/FfyO7LeOCT

Another user retweeted the official post and wrote, "This Twitter feature is so cool." The riot of colours and styles surely appealed to him.

Olympics organisers also put up more details on their website. There they have included photos of more athletes. From Turkish Ebrar Karakurt's pink barnet during women's hockey match against China to Team Kenya's colourful hairstyles, the page celebrates all of them.

Tell us what are your views about such a stylish Olympics.