At The US Spelling Bee, Twins And Siblings Compete For The First Time Ever 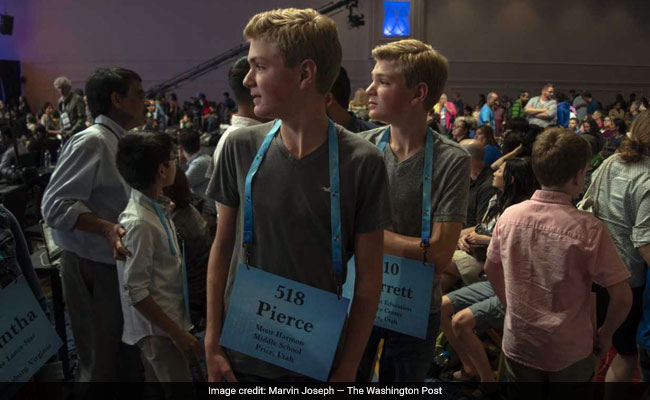 Twins Pierce, left, and Garrett Bryner, 13, of Price, at the Spelling Bee.

When Aaron Marcev ambled to the microphone Wednesday during the preliminary rounds at the 2018 Scripps National Spelling Bee, it was hard to tell who was more nervous: him, as he awaited his word, or a blond-haired, blue-eyed boy swinging his legs in his chair in the last row on stage.

Aaron got the word "tortellini." Four rows behind him, unnoticed by most, Andrew gently pumped both fists in the air and leaned over to whisper to his neighbor, as if to say: He's got this.

The 11-year-olds from Hattiesburg, Mississippi, helped make history this week at the Gaylord National Resort in Maryland by becoming one of two sets of twins to compete at the national bee for the first time. Garrett and Pierce Bryner, 13-year-old brothers from Price, Utah, found themselves in the same position, the result of a vastly expanded competition.

A record-shattering 516 spellers qualified for nationals this year, compared with 291 last year. In years past, the only way to reach nationals was to win a regional or statewide bee.

Past rules also meant siblings, let alone twins, could never go to nationals, given that one would have always had to beat the other.

This year, however, a new invitational program - dubbed "RSVBee," keeping in line with the event's countless apian puns - opened a path to the nationals for those who had previously been finalists or who had won their school bee but didn't come in first at regionals or state.

And this year, that program was the first thing that popped into Garrett Bryner's head after the eighth-grader won his regional bee in Utah. His twin, Pierce, had actually been the one to win their school bee but had placed third at regionals, tripping up on the word "de-escalate." ("I was overthinking it," he said later.)

With the help of his parents, Pierce applied through RSVBee and was accepted. The twins were going to nationals together.

That was similar to how Aaron and Andrew Marcev found themselves making up half of the Mississippi delegation at this year's bee. Aaron won a state bee, while Andrew placed seventh this year. He had, however, previously been a runner-up at regionals. Under the auspices of RSVBee, Andrew also got the green light to go to nationals.

It was, Aaron said, far more fun to have his twin at National Harbor. Together, they toured Washington sites for the first time and brought well-worn yellow sheets of paper into the resort hallways, quizzing each other on words they previously missed.

"I just get to watch him spell. We get to support each other," Aaron said. "And we have two lives."

He explained it like a video game: "Because, most spellers, they only have one life, but it's me and Andrew, so we have two lives."

They have different favorite words. Aaron's is "lagniappe," meaning "a little something extra," he said.
Andrew's is "acetylcholinesterase," a biological enzyme.

Bee officials said the goal was to even the playing field, because some regional bees in the country are extremely competitive. It was free to apply, but parents had to pay a $750 entry fee if their child was accepted.

But is a bigger bee a better bee? The mushroomed event forced a number of logistical changes, including an extra day of onstage spelling this week. The whopping number of spellers - 515, because one finalist couldn't make it at the last minute - meant the spelling took place in five separate groups.

It also meant that Jacques Bailly, the bee's longtime and beloved word pronouncer, took breaks for the first time.

Bee spokeswoman Valerie Miller said the breaks were planned because of the additional day of onstage spelling.

"We planned for judge and pronouncer breaks to keep everyone fresh for the entire competition," Miller said. "We want to start strong and finish strong."

Bee rules meant no more than 50 could advance to Thursday's final rounds, so officials tabulated scores from a written test all contestants had taken Tuesday morning to help cull the field. Of the 515 spellers who started Tuesday, only 41 advanced as of Wednesday night.

Garrett and Pierce, the twins from Utah, were eliminated based on their test scores, despite spelling their words correctly onstage Wednesday. It was their last year of eligibility, and they said they were glad to have qualified together - and to spell both of their words correctly.

"It was good to end it on a high note," Garrett said.

Aaron and Andrew, the twins from Mississippi, were eliminated onstage Wednesday when both missed their words - "tortellini" for Aaron and "evangelistic" for Andrew. But they told their parents afterward that they were going to start studying for next year's bee. Together.