At 2, She Moved From India To USA And Always "Felt American" - Until It Was Time For College

"We came to America when I was two," says the woman. "I've always felt like an American." 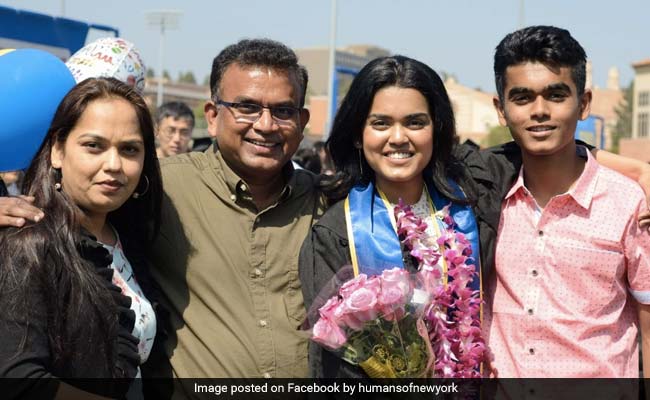 For this young Indian-American, getting into a college in the US was not easy.

Days after the United States said that it would not allow foreign students to remain in the country if all of their classes are moved online in the fall because of the coronavirus crisis, author and journalist Brandon Stanton shared an interview with an Indian immigrant to the USA. The man behind the popular page 'Humans of New York' interviewed a woman whose family moved to the US when she was just two-years-old. But despite living most of her life in USA and attending school and college there, she says that she has had to base every decision on what gave her the best chance of staying on in the country.

In the interview, she opens up about the challenges she faced getting into college, as her H4 visa status made the selection process tougher.

"We came to America when I was two," says the woman, who has not been named. "I've always felt like an American."

Following the principles of the 'American Dream', her parents told her she could do anything she wanted. But despite taking 14 honours classes and ranking fourth in her class, along with being a national champion in artistic roller skating, she faced the very real possibility of not being able to go to college in America.

"I finished my applications early. But when I showed them to my mom, she zoned in on one particular part. 'Be sure to mark that you're an international student,' she said," the young Indian-American says in her interview.

"She explained that because of my H4 visa status, the selection process would be much tougher. And I wouldn't qualify for financial aid."

An H-4 visa is a visa issued by the US to immediate family members (spouse and children under 21 years of age) of the H-1B visa holders.

The news devastated the young immigrant, who confesses that she felt jealous of her brother for being born in the US - and therefore being a citizen by birth - and angry at her parents for not telling her earlier.

"I cried for the entire day, and for the rest of the year my mental health took a really bad hit," she says. Luckily, a lot of her fears about the future did not materialise, though she was not able to get into the college of her choice.

"I was waitlisted at all my top choices. I ended up getting into a good school, but I couldn't study the arts like I wanted," she says.

Opening up about the challenges she faced because of her visa status, she says: "I've had to make every decision based on what gives me the best chance of staying in the country. It's like I'm always playing a game. And if I mess up once, I'll need to leave."

In the end, she concludes her interview by saying that the American Dream is well marketed, and confessing that she recognises the sacrifices her parents made for her. "The American Dream is so well marketed. And when you get here, it feels so close. Like if you just work hard-everything will fall into place. And I think that's what they always believed for me," she says.

You can read the full interview here.

The student's account of the challenges she has faced found a lot of support on social media.

"Wow. This hits home. Being on any kind of visa in the USA is a struggle," wrote one person on Instagram. "It all comes down to the visa. It's a status that unfortunately defines you."

"Crazy how when you just read the words about being an immigrant it's very hard to relate to your struggle but then you see the pictures and you're just a normal kid with a normal family and everyone should be given the opportunity for a better life," a Facebook user remarked.

According to news agency PTI, The US had more than one million international students pursuing various graduate and undergraduate programmes in 2018-19, according to the Institute of International Education (IIE), which is about 5.5 per cent of the total student community in the country.