ASEAN 2017: Donald Trump Isn't The Only One Who Messed Up That Handshake 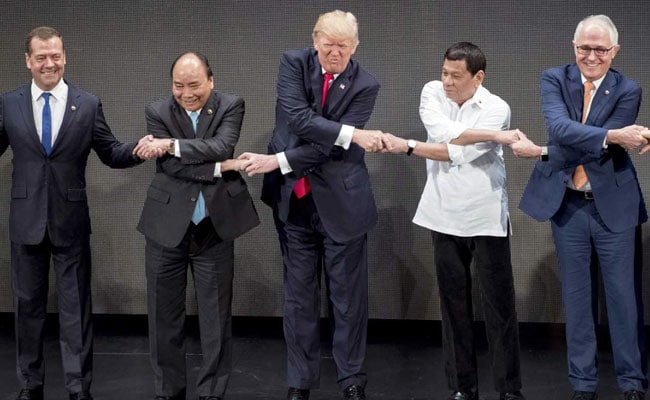 US President Donald Trump had Twitter buzzing after bungling a carefully choreographed photo op at the Association of Southeast Asian Nations (ASEAN) summit in Manila, Philippines on Monday. But while social media zeroed in on Mr Trump for failing to grasp whose hands he was supposed to be holding and breaking a lineup intended to showcase unity, many missed one other world leader who didn't even try particularly hard to get the traditional crossover handshake right.

Turns out, there was more than one confused world leader at the ASEAN summit photo op.

Take a closer look at Russian Prime Minister Dmitry Medvedev on the left. 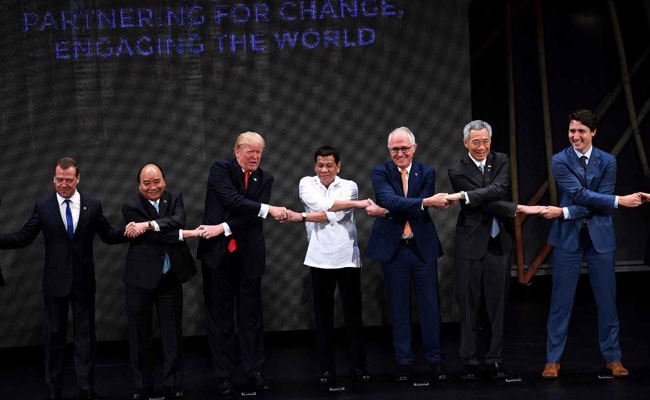 The concept of the traditional crossover handshake for the ASEAN 'family' photo is pretty straightforward.

Each leader crosses his or her arms and join hands with the world leaders on either side.

And while almost all the politicians on stage managed to reach out and clutch the hands of the person to their left and right, both Mr Trump and Mr Medvedev didn't.

Promoted
Listen to the latest songs, only on JioSaavn.com
That left ASEAN summit host Philippine President Rodrigo Duterte with a spare hand - and broke the line into two parts. Awkward. And while it took more than a few seconds for him to recognise his error, Mr Trump finally made the link between Mr Nguyen and Mr  Duterte.

The Russian PM, on the other hand, simply didn't.

Leaders of ASEAN and its Dialogue Partners do the #ASEAN way for their photo op at the opening of 31st #ASEANSummit in #Manila today. pic.twitter.com/Fj8TTxaYVP

Whether Mr Medvedev's handshake gaffe was deliberate or accidental remains unclear. But pictures show the Russian leader smiling widely with his arms outstretched, despite his faux-pas. Twitter eventually caught on to the goof-up and had a good laugh.

The official #Asean2017 handshake. Link almost failed to connect, but #POTUS#DonaldTrump used his felxibility skills while #Russian PM #Medvedev took a shortcut by not crossing his arms. #aseanmomentspic.twitter.com/1JMY8SP5If

Trump tries hard to do the #ASEAN handshake, while Russia's Medvedev cheats!#ASEANSummit#Manila#Philippines#Dutertepic.twitter.com/zhM0aFRDuS

Looks like Trump beat Medvedev in the ASEAN handshake game at least. https://t.co/jYu4FbZk17

Is that Medvedev who isn't playing along and, actually, emerges as the winner? https://t.co/1zBIXcLjz7

Looks like Russian Prime Minister Medvedev (2nd from left) has it all figured out! pic.twitter.com/NlPOwd2yrT