"Find out who she is & I promise I will reimburse her ticket costs for the rest of the India matches!" wrote Mr Mahindra 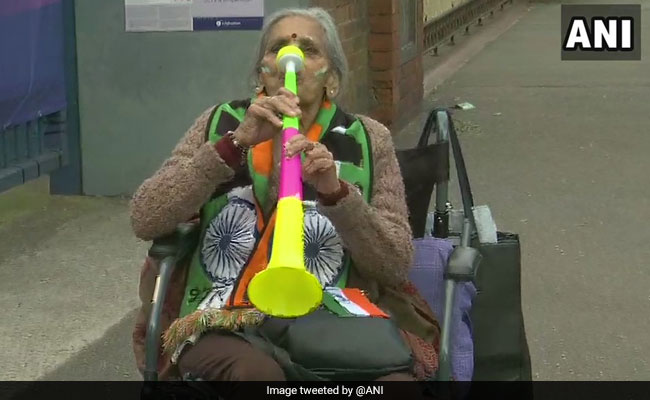 Anand Mahindra has offered to sponsor World Cup tickets for an elderly Indian fan who stole the limelight with her enthusiasm during the India vs Bangladesh match on Tuesday. Charulata Patel, 87, won the Internet as she cheered for Team India from the stands, complete with a tricolour scarf and a trumpet. Her pics soon went viral and even caught the eye of business tycoon Anand Mahindra, who tweeted that he was going to switch on his TV and watch the match just for her.

"As per my tradition, I wasn't watching the match. But I'm going to switch it on now just to see this lady...She looks like a match winner...." wrote Mr Mahindra on Twitter.

A few hours later, after India beat Bangladesh by 28 runs, Mr Mahindra again took to Twitter with an update. This time, he praised the "match-winning lady" again and asked that she be given free tickets to all India matches in World Cup 2019.

"Shabash, India & make sure this match-winning lady is present at the semifinals & finals...give her a free ticket!" wrote Mr Mahindra.

Ok, watched the last over & it had all the drama I needed. The best victories are those that make you bite your nails at 1st & then make it look easy in the end. Shabash, India & make sure this match-winning lady is present at the semifinals & finals...give her a free ticket! https://t.co/Smp0MrqCIA

Following this, when a Twitter user asked if Mr Mahindra could sponsor the octogenarian fan himself, he readily agreed.

"Find out who she is & I promise I will reimburse her ticket costs for the rest of the India matches!" he said in a tweet that has gone viral.

Find out who she is & I promise I will reimburse her ticket costs for the rest of the India matches!???? https://t.co/dvRHLwtX2b

Mr Mahindra's offer to sponsor Ms Patel's ticket has been 'liked' by 10,000 Twitter users and has won him a lot of goodwill and praise on the microblogging website.

Meanwhile, he wasn't the only one impressed by Charulata Patel and her enthusiasm. Virat Kohli, India's captain, was seen having a conversation with her after India's victory. He shared pictures of their interaction on Twitter, praising her dedication.

Also would like to thank all our fans for all the love & support & especially Charulata Patel ji. She's 87 and probably one of the most passionate & dedicated fans I've ever seen. Age is just a number, passion takes you leaps & bounds. With her blessings, on to the next one. ???????????? pic.twitter.com/XHII8zw1F2

Speaking to ANI, Ms Patel said she has been watching cricket for last many decades. She added that she was there in 1983, when India won the World Cup for the first time under the captaincy of Kapil Dev. "India will win the world cup I am sure. I pray to Lord Ganesha that India wins. I bless the team always. When Kapil paaji won the World Cup in 1983, I was there as well," she was quoted as saying by ANI.