Steve, Fina's husband, was ecstatic that she was back by his side 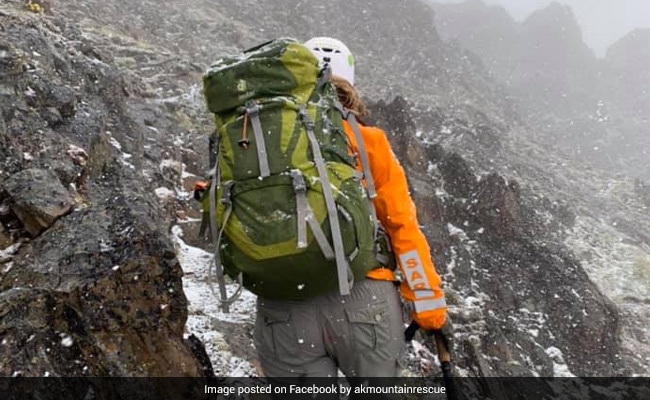 The Alaska Mountain Rescue Group shared pics from the rescue mission on Facebook.

Fina Kiefer, a resident of Palmer, Alaska, and an avid hiker, is finally back home after being lost for nearly two days. The 55-year-old was hiking the 13.6-mile Pioneer Peak Trail alone last Monday, June 14, when she had a run-in with some bears. It took her a day and a half to re-establish contact with the outside world again. Fina somehow got in touch with her husband and reported the situation she was in. On Tuesday, at 1 AM, Steve Kiefer, Fina's husband, received a message from her saying that she had been chased by two bears.

She also added that she was left with only half a can of bear spray.  When Steve couldn't get in touch with her again, he called 911, Alaska News Source reported. Steve said it was frightening not able to know what she was going through. Later, Fina told her husband that she'd hiked back to the mountain to avoid bears, but her cell phone had stopped working.

She described her journey after becoming lost and being charged by bears. https://t.co/oIrbnAwvzJ

Soon after Steve communicated the matter to the authorities, members from the Alaska Mountain Rescue Group and MAT+SAR Search & Rescue swung into action. Senior Master Sgt. Evan Budd, superintendent of the Alaska Rescue Coordination Center and full-time member of the Alaska Air National Guard said that Fina was chased off the trail by bears and she failed to find it again. “She had waterproof matches and was able to start a fire,” he said.

Not just that, Fina could even see helicopters searching for her during the two days that she couldn't establish any contact with her husband. However, since she was in the woods, the helicopters could never find her. She continued walking down and making it to someone's yard, but there was nobody inside. She once again stepped out onto the road where at around 5:30 PM on Wednesday volunteer searcher Stephen Dunphy found her and took her back to search basecamp. The Alaska Police Department that was publishing all the updates related to the search operation on its website in its last dispatch said that the Alaska State Troopers were notified by a volunteer departing the search area that Fina Kiefer walked out of the woods as they were driving by on Knik River Road, about a mile from the trailhead. "Kiefer has injuries and EMS is transporting her to a Mat-Su area hospital for evaluation," it said.

The hiker is now back home and her husband couldn't be happier. Steve was ecstatic to see her back by his side and surrounded by so many family members who flew in from out of state as the search for Fina was on.

Fina, too, thanked God that she could make it back alive. She also thanked the first responders and all the people who prayed for her.

“It makes me be so happy that I'm able to hug them again,” she said of her family. “Because nothing else matters if you don't have that.”