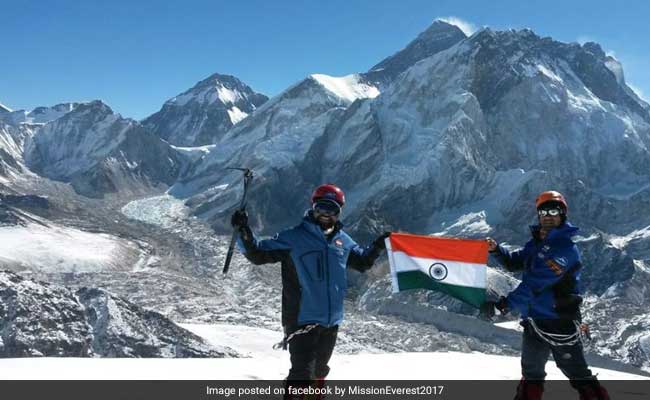 After surviving the Nepal quake in 2015, 2 friends from Pune are hoping to scale Mount Everest this year

New Delhi: Samir Patham and Sauraj Jhingan say they have been preparing to scale the world's highest mountain, Mount Everest, for years. For those who know them, this isn't a particularly surprising revelation. The two friends run a Pune-based company called Adventure Pulse together and conduct high-altitude expeditions all the time. Both are from proud defence families and share a love for the great outdoors. Both agree Mount Everest symbolises the ultimate challenge for them.


So it's not surprising that the two men, both in their mid-thirties, have started climbing Mount Everest today - nearly two years after surviving the earthquake that devastated Nepal in 2015. The mountaineers were attempting to scale Everest when a 7.8 magnitude earthquake shook Nepal on April 25, 2015. A second quake, measuring 7.3 on the Richter scale, struck a few weeks later, on May 12. Thousands lost their lives and thousands more were injured.

Samir and Sauraj were at the Everest base camp when the first quake struck, triggering an avalanche that nearly buried them.

"We were fortunate to come away with our lives," Samir tells NDTV, "but for purely selfish reasons, it was almost disappointing (to have to abort the mission) because we had trained for a year and a half...put in so much... and then saw it all literally come crashing down in front of us."

The two friends stayed back to assist the Indian Army with rescue and relief operations.

"Being involved made it seem like our being there wasn't a total waste...there was a purpose. We were able to make a small difference by helping," says Samir.

Seeing the Army in action is what inspired Samir and Sauraj to return to conquer Everest. No wonder then that the two mountaineers are calling this year's attempt "Mission Everest 2017 - Soldiering On."


The duo also hopes to draw more attention to and raise funds for Queen Mary's Technical Institute or QMTI. The Pune-based NGO provides vocational training for soldiers left disabled in the line of duty.

The two friends, who met at the Symbiosis Institute of Business Management while getting their MBA degrees, first learnt about QMTI as part of the B-school's Corporate Social Responsibility outreach. "Working with the ex-servicemen there quickly became about so much more than just a way to earn extra credit," says Samir. "Their enthusiasm and motivation was so infectious - it stuck with us."

The duo hopes they'll be able to unfurl the Indian flag on the top of Mount Everest to coincide with QMTI's centennial anniversary this May.


Samir and Sauraj believe that each person has their own proverbial Everest - an incredible ambition that forces them to rise to the challenge. "That one goal could be anything - wanting to become CEO, or open your own business," says Samir. "Everest symbolises that ultimate challenge. Ask someone 'What's your Everest?' and they instantly know what you're asking about."

The two men spent the better part of the last two years waking up at 4 AM each morning, hitting the gym, building strength and endurance. "There were plenty of moments we wanted to crash, watch TV or laze around but we knew that every minute counted. We had to invest in ourselves to make the mission a success," says Samir. "That's what motivated us to jump out of bed each morning. That's what pushed us to run that one extra mile."


Samir laughs when asked to describe his relationship with Sauraj. "When he calls, my wife often teases me saying your 'other' wife is calling," he says. "Organising the expedition with Sauraj has been like having the best gym buddy in the world around at all times. One day, he motivates me, the next day, I motivate him. We're partners. And that's important because this trek is not an individual effort - it's a team effort."


Samir and Sauraj say their focus has always been on the bigger picture. Yes, they're worried about what could happen this time around as they begin their two-month long expedition. "It's scary, but you can't spend your life being afraid. You have to learn how to channel that fear positively," says Samir, sounding more like a motivational speaker than a mountaineer for a brief moment.

Promoted
Listen to the latest songs, only on JioSaavn.com
"After all," he laughs, "statistically, it's much scarier driving around the roads of Delhi."