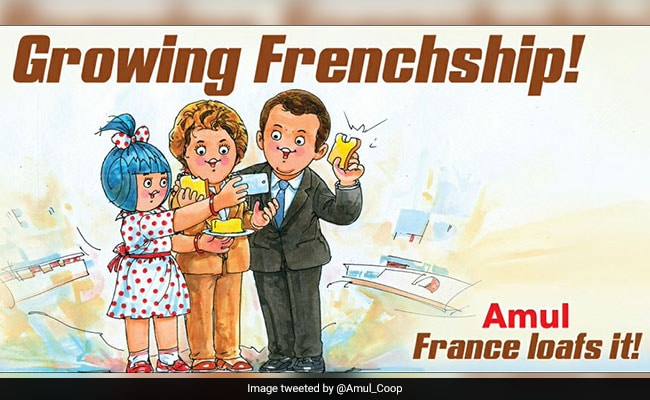 During his recent four-day visit to India, French President Emmanuel Macron visited the Taj Mahal, went on a grand tour of Varanasi, and inaugurated Uttar Pradesh's biggest solar power plant with Prime Minister Narendra Modi. To celebrate his visit and the ties between India and France, Amul came up with a creative graphic. It pays a tribute to the 'Growing Frenchship' between the two countries. See it below:


While the creative tribute was much-appreciated on Twitter, it also caught the eye of the French Ambassador to India, Alexandre Ziegler, who took to Twitter five hours ago to thank Amul for the cartoon.

"Thank you @Amul_Coop for this very nice cartoon! President @EmmanuelMacron loved this taste of India," he wrote.

Thank you @Amul_Coop for this very nice cartoon! President @EmmanuelMacron loved this taste of India #MacroninIndiahttps://t.co/VJB6ueWQLG


Meanwhile, here is what people are saying about the cartoon.

Tagging the French President, one person tweeted: "CC: @EmmanuelMacron You should definitely RT this... This Image is equivalent of your face appearing on front page of TIME Magazine." High praise, indeed.

Promoted
Listen to the latest songs, only on JioSaavn.com
"Never-ending creativity!" wrote one person. "France "LOAVES" it," wrote another, quoting Amul's cartoon. "Much love for all the creative adverts," tweeted a third.

French President Emmanuel Macron and his wife Brigitte Macron landed in New Delhi on Friday for their four-day trip to India. Mr Macron was greeted at the airport by Prime Minister Narendra Modi.Click for more trending news