This will make you laugh out loud. 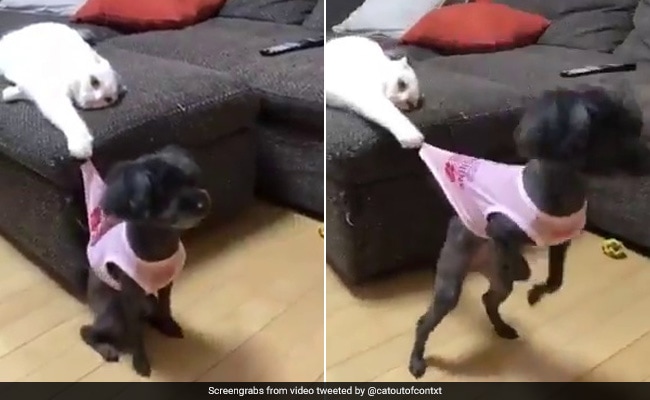 A mean feline trolls a hapless dog in this video.

Forget everything that 'Tom and Jerry' taught you about cats being scared of dogs - because if the explosion of cat videos on social media has taught us anything, it is that cats are not afraid of anyone. Pics and videos of domestic cats make up some of the most viewed content on the World Wide Web - and it's not difficult to figure out why. Arguably the Internet's favourite animal, cats have fascinated millions of social media users with their hilarious antics and devil may care attitude.

One such cat video, which has left viewers in splits, shows a particularly mean feline trolling a hapless dog. The video, which is actually not a new one, saw renewed surge in popularity after it was shared on the popular Twitter page 'out of context cats' recently.

The video shows a cat lying calmly on a couch while a dog, wearing a pink T-shirt, sits in front of her. The poor dog's attempt to get up and walk away, however, a thwarted by the cat who calmly extends a paw, catches hold of his T-shirt and prevents him from being able to move from his spot. What makes the whole thing funnier is the cat's inscrutable expression throughout - she does not even bother to raise her head and reposes calmly while watching the dog struggle to get away.

Since being shared on the microblogging platform last week, the video has collected over 1.5 lakh views and a ton of amused comments.