Devika Bhise and Nicholas Gilson got married at The Leela Palace Udaipur. 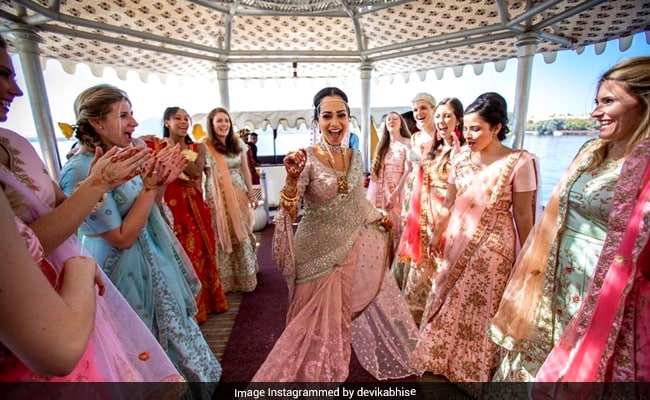 Actor Devika Bhise on the day of her Hindu wedding.

After a love story 10 years in the making, actor Devika Bhise married Nicholas Gilson in an intimate, fun-filled wedding in Udaipur this year. Best known for her performance in The Man Who Knew Infinity, Devika Bhise's February wedding was - in her own words - "overwhelmingly special!"

While Devika had earlier delighted fans by sharing a few snaps from the wedding day and pre-wedding functions on Instagram, designer Anita Dongre took to Instagram this morning to give them another glimpse of the celebrations, as well as a look at the couple's adorable love story. In her Instagram post, Anita Dongre shared a few videos from Devika's sangeet night - for which the bride opted to wear a gold and navy lehenga by the designer - and also posted snippets of an interview with her.

In the post, Devika revealed that she had met her better half for the first time in 2007, while she was pursuing an acting course. Over the course of the next few years, they kept bumping into each other - much like a rom-com.

"In 2017, Nicholas texted telling me he had never stopped thinking about me. I was in LA at the time so it took another attempt on his end before the timing worked out. We had the best first date ever," said the actor.

After four months of dating, Nicholas proposed to Devika - and so began the preparations for their wedding.

"I was born and raised in New York but have strong roots in India. Nick was raised in Providence, but his father is from New Zealand, and his mother is from Maryland. So, it was important for us to blend traditional Indian customs with western ones," explained Devika to Vogue. The couple decided to hold their wedding at the Leela Palace Udaipur.

Anita Dongre's glimpse into the actor's sangeet night is just one glimpse into the celebrations that included only close friends and family. The dance performances of the night were complemented by a traditional Rajasthani feast for the guests.

For her mehendi function, the bride chose to spend her time dancing, having completed her mehendi session two days in advance. "The theme was a bazaar- complete with all kinds of vendors from street food, bangles, shawls, palm readers/ astrologers, and textiles," she wrote on Instagram.

The MEHENDI!! 02.15.20. Day two, event two (of three!) that day. The theme was a bazaar— complete with all kinds of vendors from street food, bangles, shawls, palm readers/ astrologers, and textiles. Of course it wouldn't be complete without a camel ???? and a Tuk Tuk ???? !! Major props to @swatibhise who got me to do my 3.5 hour mehendi session two days in advance so I could spend the actual event just dancing and having a blast!!) ???? by my hero @taruntahiliani ???? by @mickeycontractor ???? by @corygoldbergphotography #nickgetsbeezy

Devika Bhise and Nicholas Gilson had two wedding ceremonies. For the Hindu ceremony, the Maharashtrian bride went the traditional way and wore green as per custom. "Maharastrian brides traditionally wear green, and the wonderful Tarun Tahiliani custom designed this beautiful ombre green and pink pearl sari for me, with a pearl mesh veil and the traditional Maharastrian pearl Mundavalya," she wrote while sharing photos from the stunning ceremony.

Putting the magical blur of the past week into words seems impossible. Aside from the feeling that comes from tying the knot with the love of my life @nicholasgilson, having all of our nearest and dearest friends and family gathered together for this celebration is overwhelmingly special!! (That's why you give 18 months notice for everyone who questioned our 1.5 year engagement!! ????????) I have so many pictures and so much to say and so much gratitude so I'm just going to post in waves!! . . . 02.16.20. These photos are from the Hindu Wedding that took place on the morning of the 3rd day of our wedding. Maharastrian brides traditionally wear green, and the wonderful @taruntahiliani custom designed this beautiful ombré green and pink pearl sari for me, with a pearl mesh veil and the traditional Maharastrian pearl Mundavalya. He and my only fashion icon ever (and sole wedding planner), my mother @swatibhise, put together a soft, elegant look that felt absolutely perfect for my wedding day!! . . . Before the wedding, I had my own “baraat”, or wedding procession, (this is traditionally only done by the groom) that involved me and my bridesmaids dancing and blasting Beyoncé and CHVRCHES on a boat that sailed around Lake Pichola, which couldn't have been a more perfect way to start the day!! . . . More soon. ???????? ???? #nickgetsbeezy . . . ????: the magnificent, talented and hardworking @corygoldbergphotography and a couple by the make up icon @mickeycontractor, artist extraordinaire!

Dreamy photos of the couple's Western wedding show them cutting their wedding cake with a sword 300 years old. Describing the night, the bride wrote: "It was hands down the best night of my life tied with the night before and the night before that."

02.16.20. Our Western Wedding!! We cut our cake with a 300 year old ceremonial sword, we hadn't slept in days so my voice was shot, and it was hands down the best night of my life tied with the night before and the night before that ???????????? (actually was this just a dream though)!! Thank you @onempireband and @itszarirwarden for letting me crash the show!! ???????? by @nafeesa372 and @janrather ???? by @corygoldbergphotography both???? by @oscardelarenta and ruby ???? by @jimmychoo!! #nickgetsbeezy

After the wedding was wrapped up, the couple brought festivities to a close with an after-party in Goa that included their closest friends. They are currently in Nantucket, spending quarantine with family members.