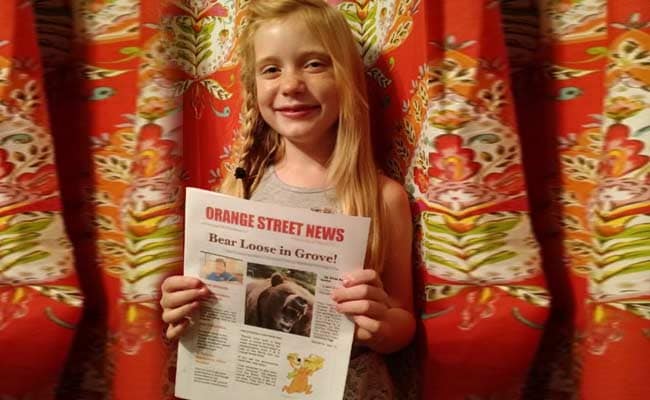 Hilde Kate Lysiak, 9, of Selinsgrove, Pa., publishes both a print and online version of the Orange Street News, and she scooped her adult competition Saturday with news of a homicide.

Reporter Hilde Kate Lysiak got the tip early Saturday afternoon that there was heavy police activity on Ninth Street. She hustled over with her pen and camera, as any good reporter would, and soon she posted something short online, beating her competitors. Then, working the neighbors and the cops, she nailed down her scoop with a full-length story and this headline:

The online story not only beat the local daily paper, but she also included a short video from the crime scene, assuring viewers that "I'm working hard on this investigation."

Then Monday came and Hilde had to go back to third grade. She is 9.

As the editor and publisher of the Orange Street News, in her hometown of Selinsgrove, Pennsylvania, about 50 miles north of Harrisburg, Lysiak is a dedicated multi-media journalist who loves going after crime stories. Her father is an author and former New York Daily News reporter who took Hilde to his newsroom and to stories he covered around New York and hooked her on the rush of chasing news.


"I just like letting people know all the information," Hilde said Monday. It's also what she sees as her career, no matter what stupid adults might say about the future of journalism. "It's just what I really want to do. And crime is definitely my favorite." She said she learned of the murder story because "I got a good tip from a source and I was able to confirm it." Well, that's how it works.

But her reporting did not impress some of the good people of Selinsgrove, and they let Hilde have it on Facebook Saturday night. "I think this is appalling that u would do a story like this when all the facts are not in yet," wrote one commenter. Her parents were attacked too: "does no one realize that this is a 9 year old reporting this type of graphic information!" wrote a Facebook poster. "I mean, what parents are encouraging this type of behavior!"

Hilde was unfazed. Sunday morning, she gathered many of the comments she'd received online, summoned her older sister and her video camera, and read the comments aloud. Then she took on her critics directly: "If you want me to stop covering news, then you get off your computers and do something about the news. There, is that cute enough for you?" Her sister edited it and posted it on YouTube. And of course on the Orange Street News home page.

Matthew Lysiak was a reporter for the Daily News who'd covered both New York and national breaking news stories when he moved his family to his native Pennsylvania about three years ago. Hilde launched the Orange Street News in 2014, when she was 7, leading with the exclusive information on the birth of her new baby sister. By the time she was 8, she was attending borough council meetings, interviewing business owners and tracking whatever crime she could find, which wasn't much. "VANDALISM ON YOUR BLOCK? THE OSN WILL INVESTIGATE!" her website declares.

She also began covering businesses and schools and any other local news, and did so well that she was profiled in the Columbia Journalism Review and on the Today show. Still, crime was her thing. Recently, she wrote a series of stories about the dreaded Selinsgrove vandal who was damaging plants around town. "BREAKING NOW! VANDAL STRIKES AGAIN!" Hilde wrote last month, with accompanying video. "Officials Pledge to 'Get to Bottom' of Vandalism," came the natural follow-up.

And it was her tenaciousness on the vandalism story that led her to the murder scene, her father said. "She heard they'd got the vandal," Matthew Lysiak said. "She goes down to the police department and says, 'I heard you caught the vandal.' The chief says, 'I've got a big story, I've gotta go.'" Hilde began following up, and in the town of about 5,000 people, soon learned where the action was. "Because she's the only one doing community news, she's developed sources who trust her to cover the news. One of her sources contacted her, and she was able to confirm it with law enforcement. She knocked on every door, like she'd seen me do with the Daily News. There were no other reporters there."

She headed home with the basics, wrote it out for her dad, who posted it on the website. Then she went back to the scene, ferreted out more information and posted a full story, photo and video hours before the Daily Item, a newspaper and website which covers four counties in the Susquehanna Valley. The Item's editor and the borough president did not respond to emails seeking comment Monday.

"She's really motivated," her father said. Though some have questioned his parenting skills, Lysiak said his daughter "has been in the housing projects in the Bronx with me. She doesn't have a lot of fear. She just wants to get the stories out. And she really wants to report real news." I asked Hilde what the police think of her and she said, "The police never really answer anything about my questions."

Hilde said she doesn't much care for the criticism she receives. "People thought I should be like playing tea parties or doing something other than being at the crime scene," and "I haven't really checked" to see if she had received more after her Sunday video blast. In her response, she said, "Because of my work, I was able to inform the people that there's a terrible murder, hours before my competition even got to the scene. In fact some of the adult-run newspapers were reporting the wrong news, or no news at all."

She does acknowledge that her 12-year-old sister, Isabel, edits and posts her videos, and also writes a kids' column for the Item, identified as "the youngest paid advice columnist in America." But that's a whole separate publication. "I'm the only one who writes the Orange Street News," Hilde said. She also publishes and distributes a print edition once a month, with paid mail subscriptions for $10 a year.

And last month, the Orange Street News website racked up nearly 18,000 page views, driven in part by her investigation of drugs in the middle school. I know some bloggers who would love page view numbers like that.