Lexie Comeau-Drisdelle has since been honoured for her act 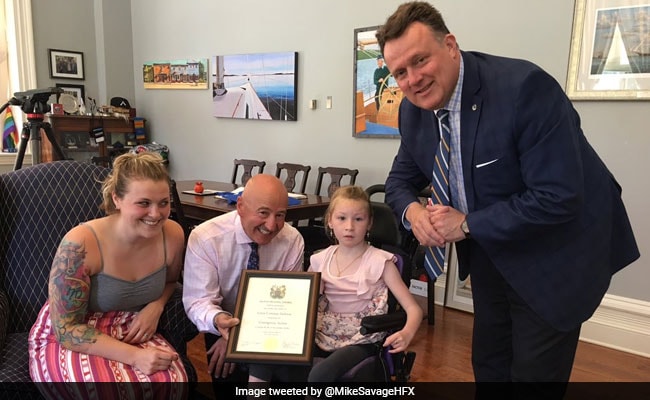 A little girl in Canada is being hailed as a hero for saving her baby brother's life. Lexie Comeau-Drisdelle from Nova Scotia, Canada, has cerebral palsy, a disorder of movement, muscle tone or motor skills. She, however, did not let that stop her from saving her brother from drowning in the backyard pool at their home. Lexie immediately alerted her family when she saw her brother fall into the pool, thus saving his life.

The family was preparing for Lexi's birthday party when 18-month-old Leeland stepped outside the house and fell into the pool, reports Global News.

Noticing the scary situation, Lexie, who uses a wheelchair and also cannot talk, shouted and pointed to grab her mother's attention to alert her about little Leeland, reports BBC.

It was eventually Lexie's grandmother who reached the pool and pulled Leeland out in the nick of time.

"She saved his life. She definitely did because things happened so quickly," Kelly Comeau-Jackson, Lexie's mother, told Global News about her daughter.

The nine-year-old has since been honoured for her act. "Heroes come in all sizes. It was a real pleasure to recognize young Lexi for alerting her mom when her toddler brother made a dash for the pool," Halifax Mayor Mike Savage tweeted on July 4.

Heroes come in all sizes. It was a real pleasure to recognize young Lexi for alerting her mom when her toddler brother made a dash for the pool. @TonyMancini_NSpic.twitter.com/EFaIbBo3Wv

Several others on Twitter have hailed Lexie's heroic act.

"Congratulations Lexie. Tough situations only happen to tough people. You are a fighter," says one Twitter user. "This is so cool. I'm so glad Lexi was able to save her brother!" says another. "An awesome big sister!" says a third.