7 Moments From F.R.I.E.N.D.S That Will Always Be There For You

On the 25th anniversary of F.R.I.E.N.D.S, here are seven unforgettable moments from the show 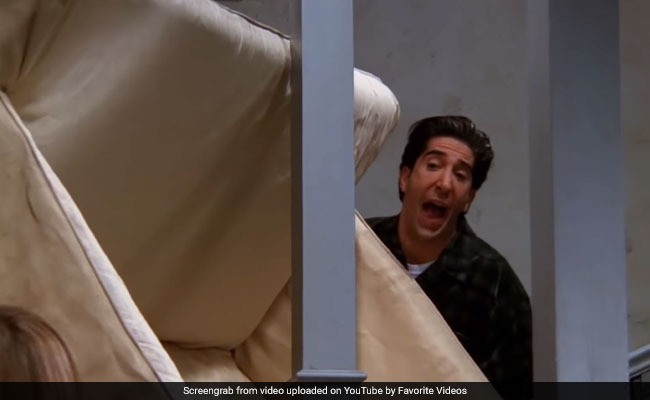 Ross yelling "pivot" has gone down in history as an iconic moment from F.R.I.E.N.D.S.

Twenty-five years ago, on September 22, 1994, the first episode of F.R.I.E.N.D.S aired. The sitcom was soon everywhere, turning its actors into household names. Jennifer Aniston, David Schwimmer, Courteney Cox, Lisa Kudrow, Matt LeBlanc and Matthew Perry became bona fide stars thanks to the popularity of F.R.I.E.N.D.S. 25 years on, the show remains a fan favourite - something to watch when you're low or need a quick pick-me-up or simply can't decide on a new show to binge on. The fact that it was the UK's favourite streaming show in 2018, according to BBC, is just a testament to the everlasting popularity of F.R.I.E.N.D.S.

On the 25th anniversary of F.R.I.E.N.D.S, here are seven unforgettable moments from the show that every fan loves to watch over and over again.

Ross yelling "pivot" as Rachel and Chandler try to help him move a couch will remain one of the show's most iconic moments. In fact, pivot is the inspiration behind Google's easter egg for Ross Geller. Simply Google "Ross" and click on the couch that appears to see what we mean.

Do you know what we are talking about?

To this day, the word lobster means something completely different to F.R.I.E.N.D.S fans

5. When Monica wore a turkey on her head

And Chandler said "I love you" for the first time. Aww.

6. The one with all the wedding dresses

Who needs a man when you have friends like Rachel, Phoebe and Monica.

7. When Rachel got off the plane

She got off the plane!  Rachel getting off the plane and coming to Ross will remain, forever and always, one of the best moments from F.R.I.E.N.D.S.

Which F.R.I.E.N.D.S moment is your favourite? Let us know using the comments section.