In the video, she can be seen dressed in a saree, using notches placed on either side of the steps to climb up. 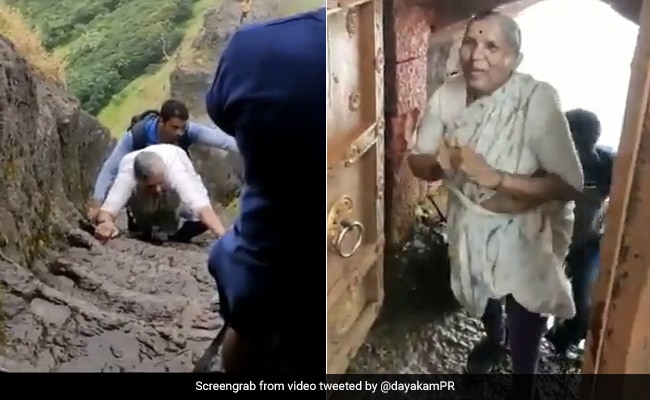 At 68, this woman aces a steep climb up the Harihar Fort in Nashik

A 68-year-old woman was met with applause after she completed a steep trek up a fort in Maharashtra. An undated video that has surfaced on Twitter shows the woman climbing the steep steps of Harihar Fort in Nashik. The fort is famous for its narrow, rock-cut steps that are carved at an almost 80 degree incline. The steep ascent can be challenging even for professionals, but this 68-year-old woman faces the challenge and comes out on top with a huge smile on her face.

In the video, she can be seen dressed in a saree, using notches placed on either side of the steps to climb up. She does not let he steepness of the ascent deter her. As she reaches the top, she is met with cheers, whistles and loud applause from onlookers, some of whom were filmed recording the incredible feat.

The video was posted on Twitter by the Deputy Director of Maharashtra Information Centre, Dayanand Kamble. "If there is a will there's a way...." he wrote while sharing the clip.

Look at this 70 year old mountaineer, salute to this "माऊली" #जयमहाराष्ट्रpic.twitter.com/lVpETjQJ8u

The video has been widely circulated on social media, garnering nearly 20,000 views on Twitter.

Some social media users identified the woman as one Asha Ambade and praised her for acing the tough climb.

"She's proved what everyone says.. 'Age is just a number'," wrote one Twitter user.

"Sheer will power makes us do wonderful things," said another.