10-Foot Python Found Under The Hood Of A Car. Watch Hair-Raising Video

"We received a call about a large python under the hood of a blue Mustang!" FWC wrote. 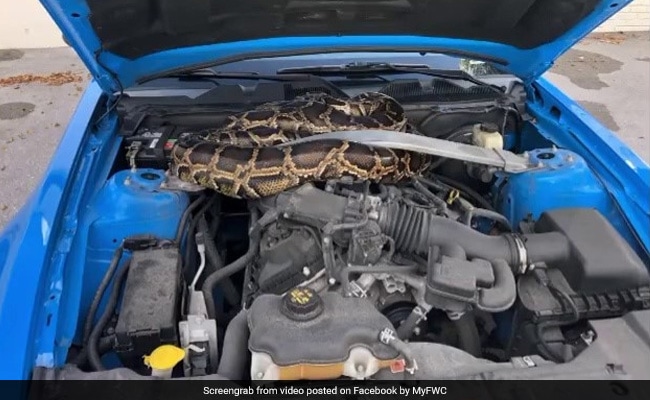 A python was found under the hood of a car in Florida.

A huge Burmese python somehow snaked its way under the hood of a car in Florida, giving its owner an unpleasant surprise. Wildlife officers were called to a business in Dania Beach, Florida, on Thursday, reports CNN. They were tasked with removing the huge python from the engine compartment of a Ford Mustang.

Maor Blumenfeld said people at the business found the snake when they opened to the vehicle's hood to investigate the check engine light. He recorded a video of Florida Fish & Wildlife Conservation Commission officers removing the huge snake from the car.

The scary footage was later shared by FWC on social media. "We received a call about a large python under the hood of a blue Mustang!" they wrote while sharing the footage. "Our officers quickly responded and safely captured and removed the approximately 10-foot invasive snake."

Watch the hair-raising footage below:

"Nope, would never get in that car again," wrote one person in the comments section.

"That's so Florida," said another.

The FWC in its post thanked people for reporting the python, writing: "This is a success for native wildlife since pythons prey on native birds, mammals and reptiles. Thanks to the citizen who reported the python to us. We rely on reports from the public to help us quickly respond and remove these species."