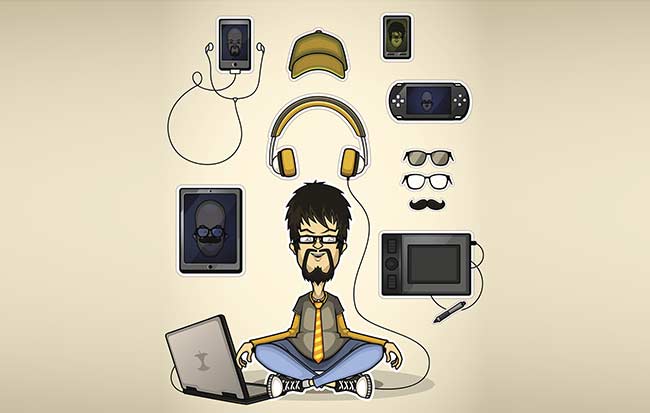 New Delhi: Time was when being a nerd was to be too school for cool. Everyone wanted to copy your homework but nobody wanted you at their parties. Thanks to people like Mark Zuckerberg (helped in no small part by Jesse Eisenberg's portrayal of him as a man armed to the teeth with contempt and clever comebacks) being a geek is now more acceptable than ever before. Because let's face it - when just about any strange app you can think of gets valued in billions, the geek you're talking to could just be the next big thing. Here are 10 things life, the universe and everything as we know it in the digital age have to thank the pantheon of geek gods for.

Made 'trending' trendy
Remember when the trendiest folks were the ones who weren't trying to be trendy? It's okay to trend now. Heck, it's okay to do everything you possibly can to make sure you do trend. If you're not trending, then who are you and what the Steve Jobs are you doing online?

Wag the dog? Online, we hashtag #thedog
Time was when people just wanted your #. Now, you're only #cool if you have a #number. #Truestory.

App-ified the world
The app is the new coming of age novel and anybody worth talking to these days is working on an app in their spare time. Every last app will change the world, and more often than not, will change the world by adding one small feature to your Facebook or Twitter experience. Wait, you didn't know there was a world outside Facebook and Twitter? Hmm.

The geek shall inherit the Earth
Check out the latest valuations for Apple, Google and Facebook. These days, being a geek is cool but you don't have to be a techie to have a little of the magic rub off. Just read up on any subject, and then tell anyone who asks - and also some people who don't - that you're a history geek, or a math geek, or a My Little Pony Friendship is Magic geek.

We got game
For some reason, being a game geek is the only kind of geek that isn't cool yet. But if you've got a computer, or a phone, or a tablet, then the chances are pretty good that you game. And if you're carrying a smartphone, then the odds that you're gaming more than once in a blue moon are pretty high. Had a Candy Crush phase? Were addicted to Words with Friends? Discovered the magic of Flappy Bird before it was too late? Congratulations and welcome to the club.

i before everything
Wren and Martin had it wrong, i comes before everything even after c. Your computer is an iMac, your phone is an iPhone, your tablet is an iPad and you're listening to music on an iPod. You're waiting for the inevitable iWatch announcement even when you scoff at the Android Wear news. You're hoping for an iCoffeeMachine and for an iTV too, even if you're not willing to admit those two out loud just yet.

It's ok and not creepy to 'follow' someone now
Raise your hand if you've ever spied on your ex on Facebook. Yes, we thought so. But it's perfectly legit to 'follow' them or anyone else and e-snoop mercilessly.

Measuring our lives in timelines
Once you've 'followed' your prey, their lives are available to you by means of their timelines. At the same time, every time there's a minute change in the design and layout, the whole world gets together to protest. We're on the threshold of world peace with this thing.

Promoted
Listen to the latest songs, only on JioSaavn.com
'Like' is almost more important than love
You might love that picture of a boy and his dog but, more importantly, do you and did you 'like' it? It's the new superlative.

The new rules of grammar: verbing nouns
Google it. Techies simply don't have the time to say 'search for that on Google.' If you're saying things send me a message on Twitter or I'll add you on Facebook, you're utterly behind the times. Even grandmothers know that sending an IM simply means you are Whatsapping with friends.